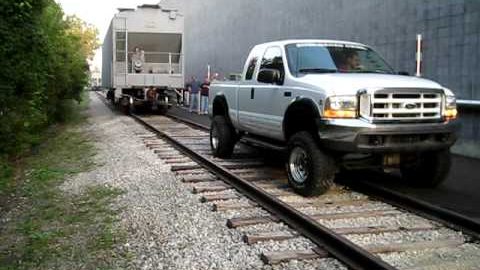 What a situation arises in which someone can show off the pure strength and pulling ability of their truck, it isn’t too often that they will turn down the opportunity and this time, we check out a 12-valve Cummins powered Ford as it hops to the task of yanking along 98,000 lbs!

When a situation arose where a rail car needed to be moved on a job site, this Ford owner got to work, making use of his swapped truck to get that heavy car out of the way while rolling a gigantic plume of black smoke out of the exhaust the entire time.

We know that some Ford fanatics might be immediately turned off by the fact that there is an engine that was originally found in a Dodge planted right inside of this Super Duty but you have to admit that it was tasked with a rather hefty job and came out like a charm!

Check out the video below as this Cummins is put to the test and provides an oh so satisfying results as it almost makes the job at hand here look easy even though it most certainly is not.

« The Fastest Big Rig Tire Swap We have Ever Seen! This Guy is Good