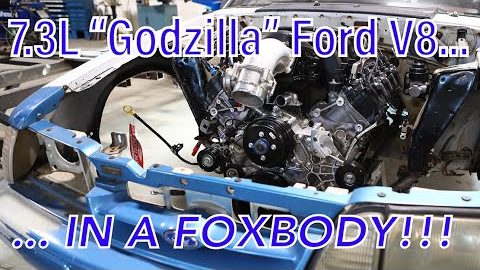 For 2020, Ford has decided to add a new option to its pickup truck lineup. This addition has caused quite the stir. In addition to the Power Stroke diesel and v10 selection for the heavy-duty pickups, we’re going to get a 7.3L gas engine. The engine is known as “Godzilla” is certainly massive in displacement. It backs up that massive nature with 430 hp.

The application seems to have been designed in order to take a beating. With that, naturally, it’s going to eventually make its way to performance applications. We love beating on our components.

It might be a natural part of the progression that it would end up in a racing machine. However, we certainly didn’t expect it to happen this soon! As it turns out, Team Z is already doing a little bit of research and development to make it work.

It might take a couple of parts to convert the engine bay of a Fox Body to handle the monster. When all is said and done, though, it’s not going to be as difficult of a swap as one might think. As we see in this video by REVan Evan, they’ve already managed to get one under the hood of such a Fox Body. Things are developing rather quickly.

As it sits, the Fox is already one of the most popular platforms for engine swaps. With a plethora of options available, the 7.3L will be just another choice for those looking to modify the fox of their choosing. Whether or not it will catch on with mass appeal is yet to be seen. However, it’ll be pretty interesting to see how all of this ends up panning out when these machines get put to the test. Could the Godzilla application potentially be the next big thing in Fox Body swaps?