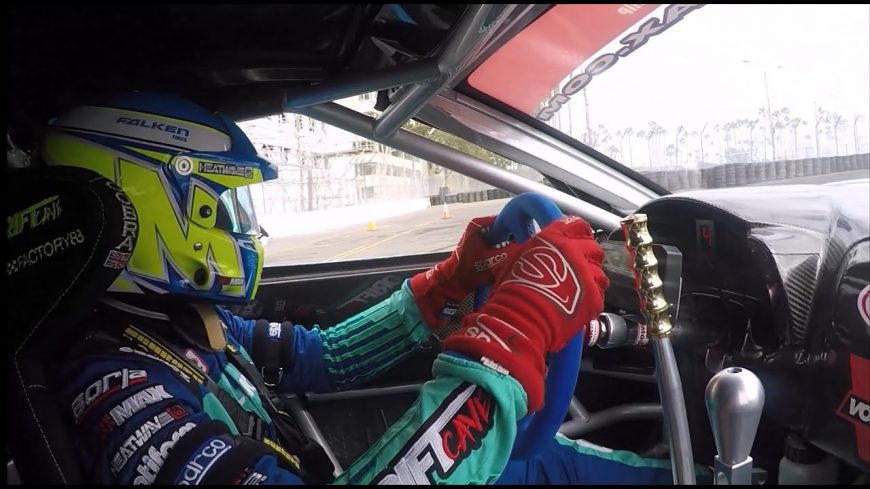 For those who ever get the opportunity to ride along in a Formula Drift machine, we recommend doing it! These guys are nothing short of off-the-wall crazy. From the outside, we can see their machines getting sideways and coming mere inches from other competitors and the wall alike. From the inside, though, it’s a whole different adrenaline rush. It really takes this scene that many might be somewhat familiar with and supercharges it. The new perspective might just get the adrenaline going in a way like never before.

This time, we are presented with exactly that opportunity. Now, this might not be as good as actually riding in the cars. However, it’s about as close as we can get without actually stepping foot outside of the house. In this particular clip, we get to ride along with a couple of drivers including Matt Field, Michael Essa, and Dean Kearney. These guys really turn up the volume a little bit as they sling their cars around the course. Just because there’s a passenger in these videos doesn’t mean that they’re going easy, either. In fact, we get the hunch that they might be showing off a little bit since they know the camera is rolling.

Following along with the video below, we get an inside look at just how much effort is going down in the cockpit of one of these drift machines. Outside, we see the cars sliding around and making it look effortless. However, inside, we get a unique view of how hard these drivers are pushing themselves in order to push their cars to the limits. We can’t make any promises here. For anyone who hops into this video with both feet first, they might want to come out on the other end with a drift machine of their own!

« Why a Cheap Bentley Might Not be the Right Play