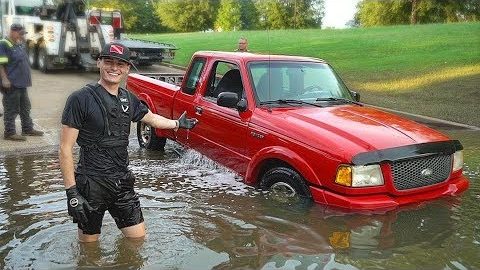 Every once in a while, you run across a situation where you’re just not having very good luck. Sometimes, it’s just not your day and when such situations unfold, things can tend to get rather expensive. However, sometimes, a helping hand can really be a big bolster to how your day is currently going. In fact, if the right person should across your path on a day like this, it could manage to turn everything around, taking your day from something that you just want to get out of and transform it into a situation that maybe isn’t so bad after all. That’s exactly what happened here as something really bad got slightly less bad in a matter of just a couple of hours.

This time, we follow along with the situation where an average guy would head to a boat ramp in order to launch his kayak for a couple hours of leisure. However, the idea of leisure would go right out the window, all in a matter of just moments as the vehicle would slide backwards and into the drink.

This isn’t the first time that this has happened but it’s a pretty extreme set of circumstances as it looks like the truck managed to roll pretty far under the water, rendering it not only completely totaled and mostly useless but also pretty difficult to recover as it wandered pretty far away from the ramp.

If you follow along down in the video below, you’ll be able to catch up with the scene of the unfortunate action as a pretty popular YouTuber who goes by DALLMYD, who’s known for his diving treasure recovery videos, comes along and helps out to get the vehicle back to dry land once again where the situation could be more carefully assessed. In addition, he even started Go Fund Me page where all $7000 that was attempted to be raised would be put together by the kindness of strangers within 48 hours of the video being uploaded. If I were to qualify the situation, I would definitely say that this bad day has at least been somewhat turned around for a little bit of a positive in all of this.