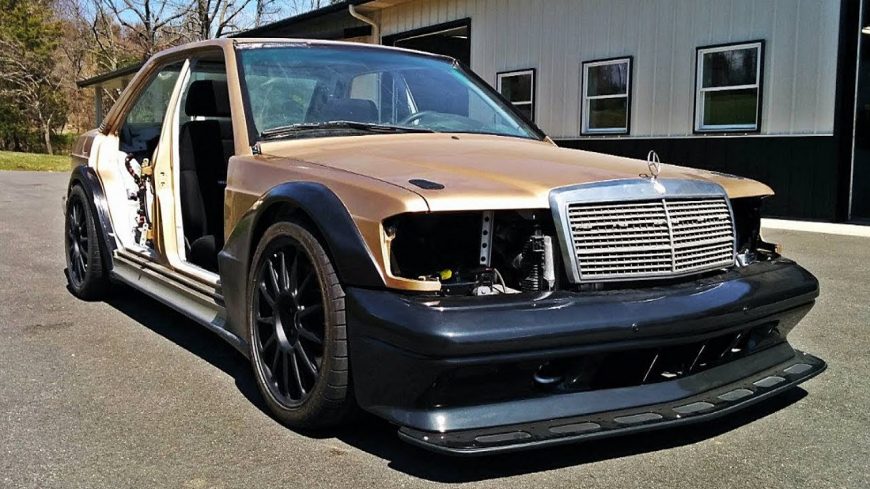 Growing up, my parents were always big Mercedes fans. I can’t remember a time when we didn’t have a Benz of some kind, and while they often sat in the garage to keep the miles down, I still remember the special occasions when we’d take “the car” somewhere. I picked up that love for Mercedes, and have been on the hunt for a Benz of my own for a while now.

I don’t want a new, stock Mercedes though. What I have in mind is something much more along the lines of the project in this video, although I have neither the skill to pull this off, nor the cash flow to pay to have it done, at least not to such a degree as what Piper Motorsports did with this project.

What ends up being one of the coolest takes on a Frankenstein build I’ve ever seen started life as two distinctly different cars. On one lift, you have a 1985 Mercedes E190, a workhorse of absolutely mediocre attractiveness. While the car appears to be in solid shape for it’s age, there’s quite literally nothing enthralling about a mid-80’s E-class. Perched atop the lift beside it, a much more notable car. The 2010 C63 AMG is one of the most well-rounded performance sedans in the storied Mercedes Benz lineage. The C63 has the perfect balance of acceleration, braking and maneuverability that drivers have come to expect from any car wearing the AMG badge, and the 2010 C63 AMG was one of the finest.

What you’re going to see below is a full 12 minutes of nothing but slideshow photos showing, in great detail, the process by which the two cars were grafted together to create the insanely cool finished product. This is some kind of rat rod meets Mad Max meets Fast & Furious with a lot of German badassness sprinkled in to make it really cool. Now I’m off to find at least one half of the cars in this video to see if maybe I can’t come up with something almost as cool on a much smaller budget!