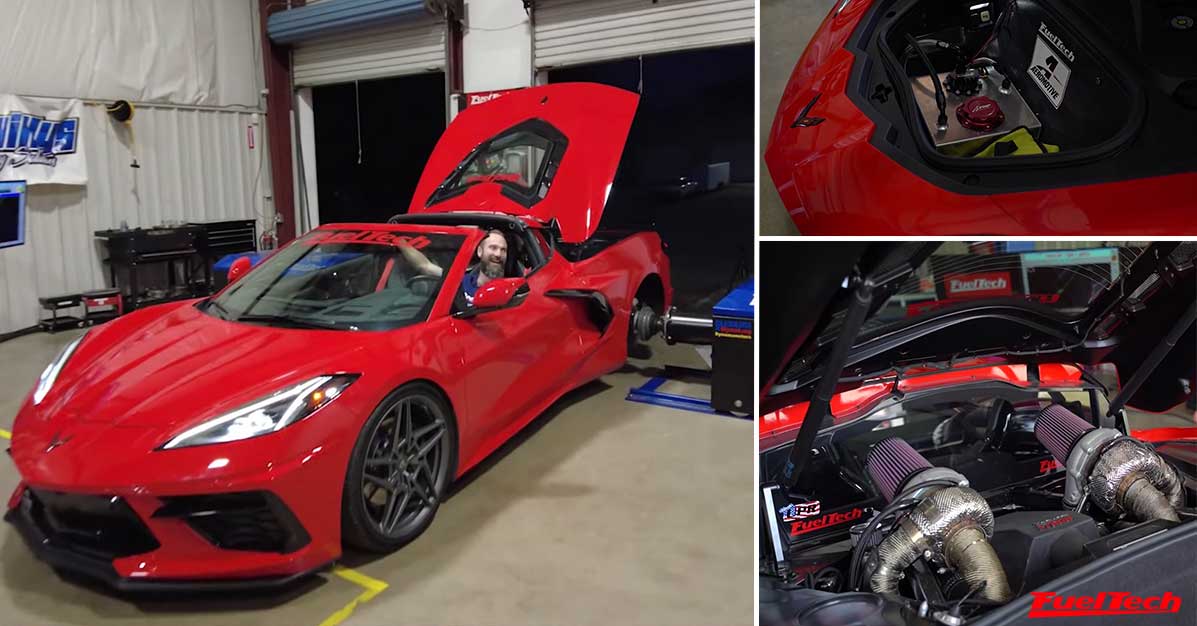 It’s usually pretty interesting when a new and exciting model comes out to see how quickly it gets modified and how far people can take the platform. For example, with the C8 Chevrolet Corvette, we would almost immediately see the modification race begin as influencers were attracted to the twin turbo route.

The longer that these cars are out, the more power that we begin to see coaxed from them. Most recently, FuelTech would be the ones behind the most powerful C8 in the world. With a record previously held by Emelia Hartford who set the bar at the 1,022 rwhp mark, FuelTech would get to work, attempting to raise that bar just a little bit further.

In that pursuit, the crew was able to figure out a way to make 1,075 wheel horsepower find its way to the wheel hubs of the mid engine machine.

Here’s how they got there.

Here are the basics. The Corvette retains much of its factory LT2 engine architecture but received a drop-in kit by Gwatney Performance (GPI). This kit includes a set of Diamond forged pistons and robust connecting rods, according to the official FuelTech blog post.

Perched atop the engine, we find a pair of Garrett turbochargers that sweeten the deal with a bit of boost. FT describes them as an “LMR-inspired top-mount turbo system uses Garrett mirror image G35-900 turbochargers.”

Here’s the problem, though, all of that power wasn’t making the stock clutch happy. This record came about after FT was able to get that clutch upgraded to handle the power.

They say “The new Dodson clutch upgrade—purchased from Cicio Performance—not only increases the clutch disc count, but it also uses better friction material, enabling the C8 Corvette to transmit more power to the tires.”

Because of this, the Corvette is now able to efficiently create 21 psi of boost and get it to the ground more efficiently. Prior to the upgrade, FuelTech found that the limiting issue of the clutch only would allow 750hp to make it to the hubs. This meant it was only really using about 4 psi of boost.

But How Was it Tuned?

As some might know, one of the main limiting factors to making these Corvettes make a lot of power is the inability for most to pull out a laptop and just tune them. As of the writing of this article, tuning software companies have yet to crack the code for the stock C8 computer. However, in this particular combination, we find the award-winning FT600 engine management system that had been integrated into the LT2 platform using a special jumper harness.

FT tells us that the FT600 provides a much more user-friendly experience and “opens up a significant amount of special features like data logging numerous FuelTech and OEM sensors, boost control, and dozens of more options.”

They also tell us that PowerFT ECU controls supply a supplemental fuel supply among other engine functions. Naturally, fuel control is going to help out big time when trying to add a supercharger or turbocharger. The machine features a 1700cc/min set of fuel injectors where fuel meets combustion after being delivered from the fuel cell hiding in the front luggage compartment.

A secondary fuel system provides the engine with VP Racing Fuels M1 methanol which allows for an increase in power along with acting as alcohol injection to cool inlet air temps so there’s no need for an intercooler.

When all is said and done, FuelTech’s build was primed to set the record and become king in this constantly evolving battleground. To see a complete list of supporting modifications, be sure to check out their blog.

« General Motors Recalls 217,000 Vehicles Due to Risk of Fire