Golf Cart With 500 HP?? The Busa Cart Hits The Dyno

Golf Cart With 500 HP?? The Busa Cart Hits The Dyno

If you want to go fast, there are a lot of unique platforms that people have figured ...

If you want to go fast, there are a lot of unique platforms that people have figured that they could shove big power into. Believe it or not, the golf cart is actually one that has seen more than its fair share of motorcycle engines swaps. With such a platform and tons of power, the possibilities are pretty much endless as to the tire shredding that one can do should they be equipped with such a combination. However, we have to say we’ve been hard-pressed to find anybody who has managed to make these combinations work in any sort of efficient drag racing set up, that is, until now.

With the golf cart that goes by the name of BusaKart, as the name implies, the machine that was once designed to get people around the golf course has since taken on a Hayabusa engine, a powerplant that can say that it makes this golf cart faster than the majority of not only other golf carts, even ones with similar engine swaps, but pretty much anything that it finds to line up next to.

The cart has recently been seen going viral as it races everything from the king of the hill in the Nissan GT-R to the Chevrolet Corvette and even a Fox Body Mustang specifically built for drag racing and powered by a nitrous infused LS engine, with the cart coming out on top seemingly each and every time.

If you follow along down in the video below, you’ll be able to watch the cart as it hits the dyno rollers, trying to do a little bit of tuning before it goes out in and slays even more unsuspecting opponents. As for numbers, we aren’t exactly clued into that but honestly, who cares? The results in races really speak for themselves.

Jumping a Golf Cart Is Never a Good Idea... 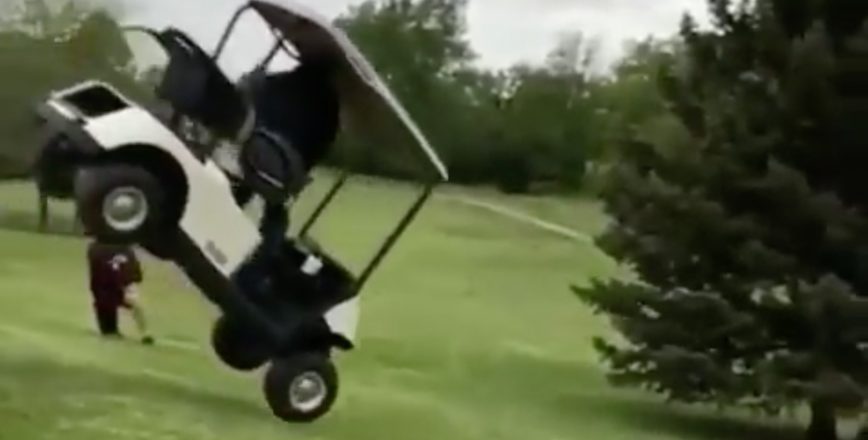