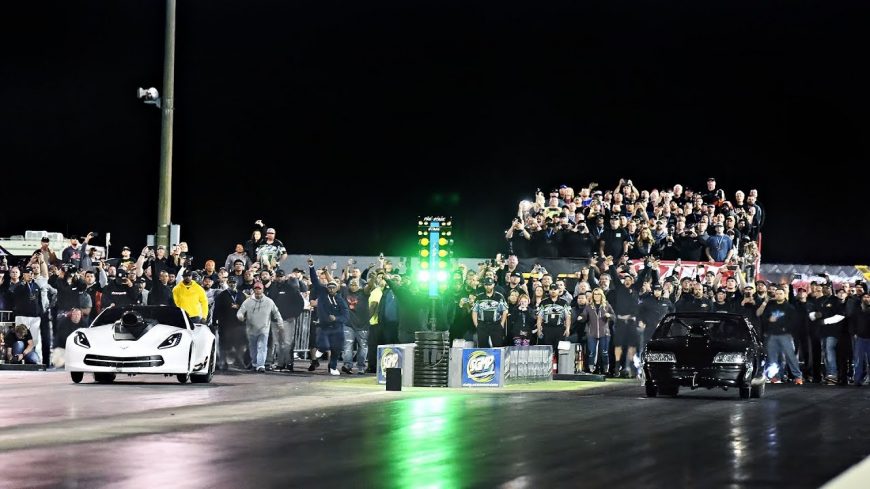 His name is J.R. Gray, a contractor from the Carolinas. However, you probably know him better for his role behind the wheel of an untamed racing beast. It might be his orange F-Body Camaro named “Headshot,” a car tuned by the man himself, Stevie “Fast” Jackson that you recognize him for. Perhaps it’s the infamous small block mustang “Jason-X.”

One thing you know is J.R. is fast, he talks lots of trash, and he backs it up.

Known for winning multiple shootouts in Headshot, J.R. jumped into the small block game with Jason-X head first. He didn’t just come out slow to feel it out as one would expect. He started in big money shootouts, calling anyone and everyone out.

Back in February at Lights Out, I had my first encounter with Jason-X. I had also seen J.R. run Headshot several times. One of the runs was for as much as $25,000!

With Jason-X, we’re looking at a pot much much larger than We saw. The race was for an undisclosed amount of money on the line that was rumored to be north of $100,000 before! The opponent? It would be J.R.’s only rival in the small block game. Look no further than Mario Johnson’s “Ghost” with Chris Tuten behind the wheel. That night J.R. lost by the slimmest of margins, but that didn’t stop him.

J.R. had been quiet for a little while online which is something we should notice. Why? When a grudge racer like J.R. is quiet, that means he’s probably up to something. The grudge game is all secrets and you’ll likely never get the true story from anyone. Showing your cards is a sure way to lose money in this world.

This week, J.R. dropped the hammer, though. He put out a statement that he’s willing to line up with any small block nitrous car. He even called out famed grudge racer and big block nitrous fed truck in “Bipolar.”

The callout includes just about anyone who wants some and falls in the same category as Jason-X.

That’s not all, though. J.R. says he will line up with any small block nitrous car in the world. Just bring your money and have your deposit ready! It’s a 2 car shootout and he’s open to buybacks.