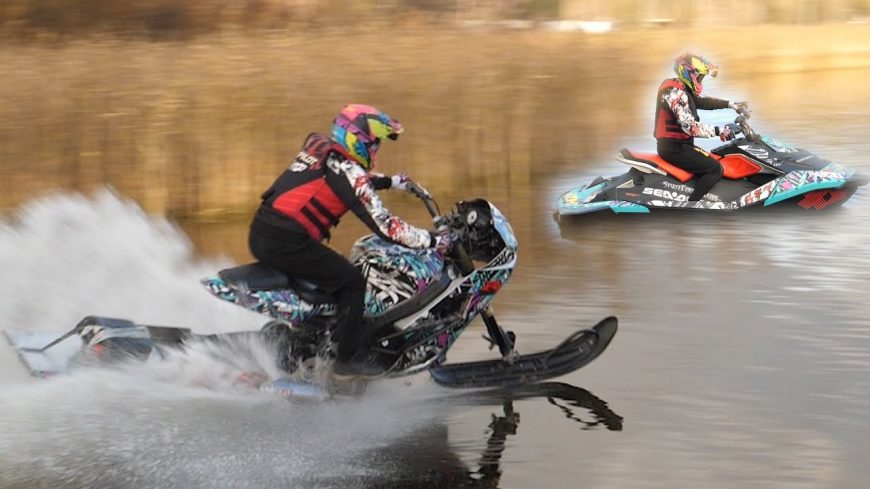 Guys! Trust me when I tell you, you want to watch this video all the way to the end! I’m not going to give away what happens, all I am going to say about the ending is that you absolutely do not want to miss it!

The Stunt Freaks Team brought their snow bike, a Suzuki GSX-R that’s been converted into a sort of “snow bike”, out to make an assault on the Guinness Book of World Records. This thing is really cool, and when you drop in the context that they’re racing a street bike, that’s been converted to a snowmobile, across a lake (no, not a frozen lake), you kind of get an idea of why we think this is so freakin’ cool!

After some discussion, the team decides that the best approach is to hit the lake in second gear and see what the top speed is using a GPS app on an iPhone. With the strategy locked down, the team drops the iPhone in a waterproof baggy and hits the water wide open alongside a SeaDoo Spark, the measure against which the record would be set.

Things go according to plan, with the snow bike hitting a top speed of 79.8 km/h. Of course, they have to have a GPS-verified top speed for the Spark as well, so they use the same phone and the same app to measure it, finding that it managed to hit 79.9 km/h, meaning they’d come up short of the record by only the smallest of margins.

The team gathers for a quick discussion and decides to make another run at the record, since the rider felt confident he could up-shift the bike to the next gear and wring out a little more top speed.

As I mentioned earlier, I’m not going to give away the ending, so you’ll have to watch and see how it goes. If you think about it logically, you’ll be dead wrong I believe! Just hit the play button below and enjoy the show, I know I certainly did!