GT500 VS 950hp Hellcat, But Ends Up in a Ditch Following a Race Gone Wrong!

by Jesse Kleib | May 4, 2021
accidentcrashgt500shelbywreck

GT500 VS 950hp Hellcat, But Ends Up in a Ditch Following a Race Gone Wrong!

One of the dangers of opening up a can of horsepower on the street is that traction ...

One of the dangers of opening up a can of horsepower on the street is that traction isn’t always beneath you. On a racing surface that’s designed to be able to handle power, drivers have a little bit better of a chance of keeping their car on course. As we have seen plenty of crashes happen on all sorts of race tracks, it’s definitely not a guarantee. However, on the street where things can be incredibly unpredictable, we really never know what’s going to happen and the danger factor is turned up without even considering the other obstacles that come with the experience.

This time, we check in on a pair of cars that attempt a little bit of roll racing but things end up going awry in a hurry.

In one corner of the bout, we find a 2020 Shelby GT500, an impressive car right from the dealership lot. In the other lane, we find an equally impressive machine in a Dodge Charger Hellcat. As we all know at this point, your typical Hellcat is capable of over 700 hp but this one seems to have things turned up just a little bit as it’s making 950 hp at the rear tires.

Straight from the factory, the Hellcat can be a hard beast to tame. It’s definitely not something for the faint of heart especially when it comes to driving on the street. When things are turned up even more, though, as you might have guessed, the situation can be much quicker to get volatile.

In this particular situation, it looks like the driver of the Charger laid into the throttle to unleash all that horsepower. Upon doing that, though, the rear end of the car kicked loose and the tires began to spin, laying down some black marks. At this point, the driver was still in control. However, when he decided to get back into the throttle, all hell broke loose as the car ended up flying off of the side of the road.

Luckily, it would appear as if the situation wasn’t as bad as it could have been. Fortunately, there were no objects on the side of the road for the sideways sliding car to run into!

Trailer Racing is EXACTLY as Catastrophic as it Sounds 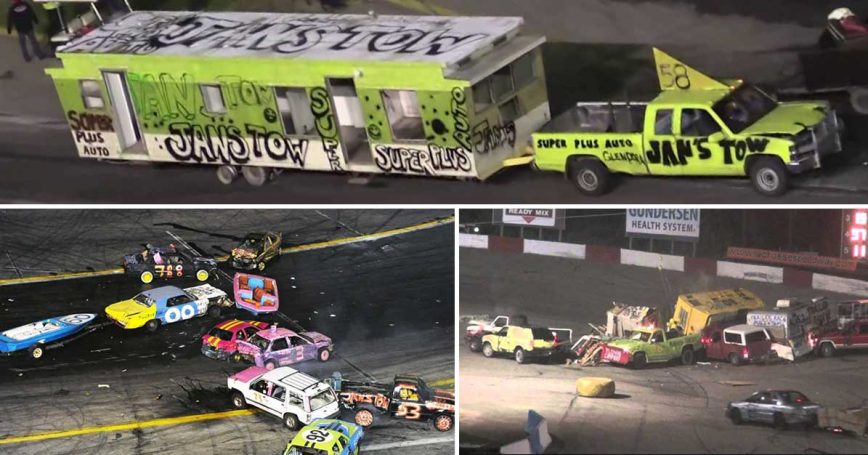