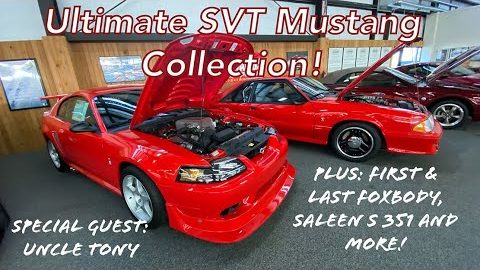 When collecting anything, it seems like collectors really tend to stray toward things with a certain number. It doesn’t matter if it’s a basketball card or a car. There are just a specific numbers in production run that make something worth more money or make them more desirable. Usually, the first and the last are going to be items to look out for. Obviously, this will vary from case to case.

In the world of cars, though, being able to get the first is something that somebody will pay a premium for as well as the last. In this particular case, we check in with a collection that just so happens to have both when it comes to the Fox Body Mustang. Under the same roof that houses lots of other Mustangs like a holy grail in the ’93 SVT Cobra R, the first and last fox body sit side by side. It’s pretty crazy to take a look at the cars and how different they are which really showcases how much the platform had evolved throughout the years.

The video from REVan Evan also dives into how exactly it is that the owner, Rick Schmidt, ended up coming into possession of both of these cars along with a couple of features on board of each that makes them unique, standing out from the pack of the rest of the fox bodies as the car was produced in quite massive numbers. In fact, we think it might even stand as the most popular enthusiasts machine ever.

Down in the video below, we get a glimpse at a couple of special Mustangs that would really make collectors go nuts. All of these cars definitely have their fair share of character and of course, they’re clean enough that you could even eat off of them!

« If a Car Salesman Asks You These Questions, it’s Time to Shut Up!