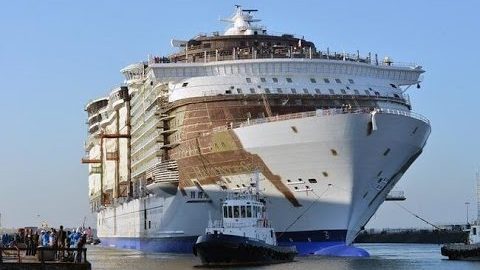 Watching a ship being built would be as boring as watching paint dry or grass grow. While the process of building the massive ocean-going cities is painfully slow in real time, if you speed the footage up a bit by doing a time lapse style video, the build can actually be watched beginning to end without growing a full beard in the process. Time lapse is a great way to capture anything that develops slowly, from plants growing to weather systems forming on the horizon. The process is simple: you take a bunch of still photos, a few seconds or few minutes apart depending on the application, and use an app to put them together. As long as you keep the camera relatively still from shot to shot, you’ll end up with a smooth motion picture that captures a long amount of time, compressed into a much more tolerable time span.

Building the MS Harmony of the Seas, an Oasis-class cruise ship built by STX France at the Chantiers de l’Atlantique shipyard in Saint-Nazaire, France likely took months, but thanks the to use of time lapse, we get to watch the assembly process in just a few short minutes. The ship is built in a sort of modular process with large sections of the hulking vessel being built to near completion, then stacked into the frame of the ship like massive building blocks. The completed build gets painted and the final touches are put on the inside, then the dry dock is flooded and the ship slips quietly out to sea. The massive vessel, which will be part of the Royal Caribbean International,  fleet is the largest passenger ship in the world, surpassing her older sisters Oasis of the Seas and Allure of the Seas.

« Dennis Anderson and His Mega Truck King Sling… One Bad B****!