When you think of a 1967 Chevrolet Chevelle Malibu crew cab, what is the first thing ...

When you think of a 1967 Chevrolet Chevelle Malibu crew cab, what is the first thing that comes to mind? There aren’t going to be very many, if any people who think of a racing machine. However, for Rick Steinke, that’s exactly what his Malibu has turned into.

In fact, these days, we would argue that the car basically is the dictionary definition of a “sleeper.”

Outside, the machine certainly doesn’t have the appearance of anything that’s all that fast. Clad with a nice patina, the car seems to blend in rather well. It looks like a cool classic car that probably has a couple of stories to go along with it. However, when it hits the drag strip, we learn that looks can be deceiving. This car truly makes sure that people don’t judge a book by its cover.

We could go on and on all day talking about the work that has gone into Rick’s sleeper to make sure that nobody suspects a thing. From the wheels to the tucked in roll cage, the old school Chevy looks like a big and heavy cruiser. Rick even took it upon himself to implement a custom exhaust system to make sure that the car wasn’t very loud.

In fact, until the NHRA rules forced the machine to have a parachute, nothing about this car looked fast. That’s exactly the way that Steinke wanted it. It had to take an incredible amount of work to keep the appearances of a racing machine at a minimum.

Even when we do consider the fact that has a parachute hanging off of the back, anyone who says that they would expect this car to run in the 7s likely lying, plain and simple. With a personal best in the 7-second range, saying that spectators look shocked to see the car run is putting it lightly.

At the end of the day, when all factors come together, we could watch the Chevelle make passes all day long. The BigKleib34 video below provides just that as we’re delivered to the scene of Drag Week 2019. In this one, we watch as the ride affectionately known as “Honk as Parts Fall Off” throws down in the 8.50 index class! – BigKleib34 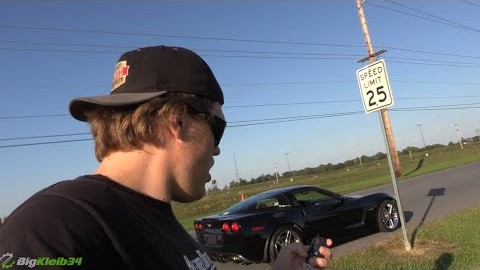