Is This ATV Waterproof? Can-Am XMR 1000 in a Swimming Pool

Is This ATV Waterproof? Can-Am XMR 1000 in a Swimming Pool

Can-Am needs to put this guy on their payroll, because he knows how to put on a show ...

Can-Am needs to put this guy on their payroll, because he knows how to put on a show and highlight the capabilities of his XMR 1000 quad at the same time! While most of us would view this literal offroad excursion as a “Hold my beer” moment, this dude hangs on to his for most of the show.

I feel like part of this stunt that didn’t get the appreciation it deserved is how this guy just drives the massive quad right through the living room of his new house like it’s no big deal. This isn’t some cookie cutter suburb house, it looks to be a pretty good sized home on quite a bit of land, so taking a massive quad with gnarly tires right through what would almost certainly be the living room seems a little crazy, but this guy doesn’t even hesitate to just drive right through.

From the living room, he heads on out to the back yard, where the swimming pool awaits. Turning the quad around on the patio, he unceremoniously backs it right down the steps into the pool. Of course, he’s done it before, so it shouldn’t be too much of a surprise that he knows the best way to go about driving into the pool. Thanks to the Can-Am’s built it snorkels, which you can see just in front of the handlebars, the engine is able to keep a supply of fresh air coming, and that’s all it needs to keep running despite being, you know, in the swimming pool.

After popping a couple of water wheelies, which we didn’t even know where a thing before this, it’s time to drive the four wheeler out of the pool. It takes a couple of helping hands to get the bulky ride out of the pool, but with those big tires grabbing at the steps, it doesn’t take too much work for it to return to dry land. So who out there is going to one-up this guy? Let’s see what you guys can come up with! 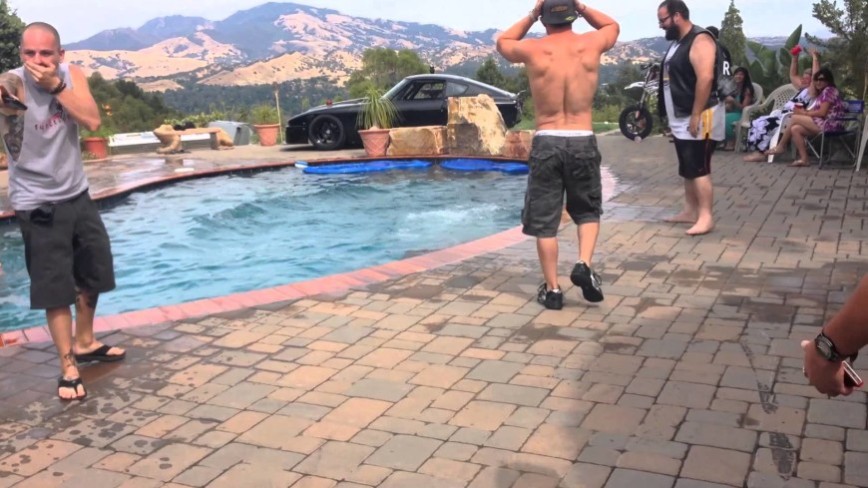