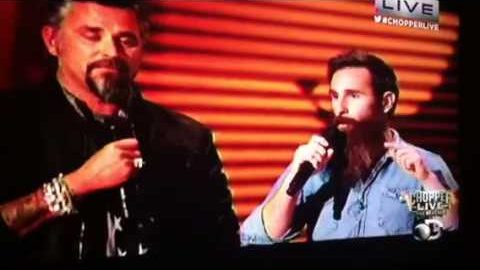 For anyone who has ever laid eyes on reality television, you know that this brand of entertainment certainly lacks no drama. Everywhere you look, there is some sort of argument or disagreement or two people simply clashing heads over something. At the end of the day, that’s what really makes it worth feasting your eyes on, right?

This time, we check out a little bit of a throwback as Fast N’ Loud goes head-to-head with Jesse James in a bike build off where tensions got really high when different elements were thrown into the mix that dove into the builders’ personal lives and took eyes off of the bike.

In this one, we check out a scene that has the men trying to figure out a way to extinguish the blaze but I’m not so sure that was a direction that the dilemma was capable of going in at that point. It kind of looks like all signs were pointing toward crash and burn!

Check out the video below as Jesse James, Richard Rawlings, and Aaron Kaufman all gather on stage in what ended up being a rather tense moment in television history. Be sure to tell us what your take is on this throwback that really had the tempers flaring up on live television.

« Nitro Circus, And Their Crazy Contraptions They Launch On The Big Air Ramp