Jumping a Car into a Frozen Lake is Probably a Bad Idea, These Guys Don’t Care

Jumping a Car into a Frozen Lake is Probably a Bad Idea, These Guys Don’t Care

Sometimes, if you get bored enough and have enough of a need for an adrenaline rush, ...

Sometimes, if you get bored enough and have enough of a need for an adrenaline rush, you could do some pretty crazy things. However, I think that when it comes to ideas like these, generally, most folks will have this little voice in the back of their head that tells them how bad of an idea it is and how wrong it could possibly go. With this display, it really seems like the person behind the wheel here just simply didn’t have that thought pop into their head when they decided they wanted to launch their car into oblivion.

The stunt here that we wouldn’t think that anybody would be willing to try outside of a professional, as it should be, was the result of somebody deciding that they wanted to take a car, ramp it off of a cliff, and fall into a frozen lake. It’s not reall clear where the upside is in this one because it seems like, for the person behind the wheel, a short adrenaline rush is met by a whole bunch of bad that you’ll be feeling after that freezing water starts to bleed into the car and the driver will have to find a way out. However, that wouldn’t deter them from sending it into the sky anyway.

If you follow along with the video below, you’ll be able to watch the act take place that you definitely should not be trying on your own. I’m sure that even though the car did end up crashing through the ice, this one could not have felt very good in any way, shape, or form. I guess that, at the end of the day, what this individual did get was a pretty neat video to look back on. However, when he does find the time to look back at this, he might just get a little bit of a flashback to the pain that he felt when he would bang down into the ice. 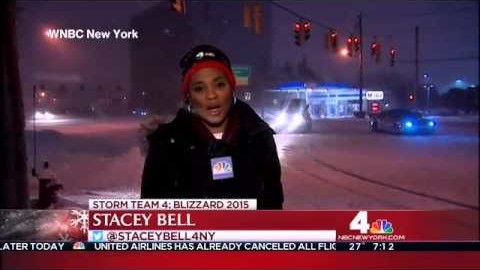