Ken Block’s Gymkhana TEN: Behind The Build Of The Hoonitruck 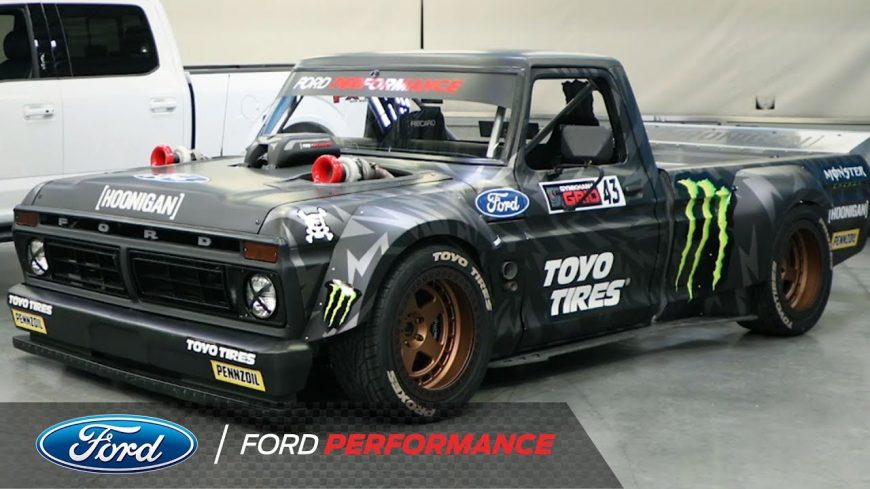 When I saw the teaser for Gymkhana 10 and got my first glimpse of the Hoonitruck, I know myself and most of the automotive community just assumed it was powered by a gnarly twin turbo V8 similar to what’s under the hood of its beloved cousin, the Hoonicorn Mustang.

The Hoonitruck, which started life as a stock-ish 1977 Ford F-150 that Ken drove into the shop for the beginning of the build. The truck was delivered to Detroit Speed & Engineering and the expert craftsmen there began the drastic overhaul that would see the truck stripped of its body and guts, only to be rebuilt from lighter, more modern materials, making the Hoonitruck a true melding of generations and a truly one-off creation the likes of which the world has never seen.

DSE set about recreating the iconic body from lighter weight aluminum to help keep the tires spinning and so they could mold it into their collective vision as they rebuilt the truck from the ground up. Inside, you’ll find a modern race car cockpit with some accents that harken back to the 70’s, keeping the theme of old-meets-new flowing through the interior as well.

Under the hood is where things really start to get interesting. While it would have been simple enough to drop a Coyote engine or even an EcoBoost powerplant out of a Raptor between the frame rails, Ken wanted something truly unique, and boy did the guys at Ford step up and make that happen. This specific engine is based on the EcoBoost platform but was actually a prototype built by Ford engineers as they prepped the GT to compete at the 24 Hours of LeMans. To see this engine holds a very special place in the hearts of all involved is an understatement.

The engine was tweaked to crank out over 900 horsepower to ensure the Ken would have no problem creating clouds of smoke from all 4 wheels, and everything was buttoned up and the finished product is nothing short of badass. We’ve all seen Gymkhana 10 by now (if you haven’t, click here!) so we know the mission was accomplished in a big way thanks to the massive effort that went into building this ridiculous ride.