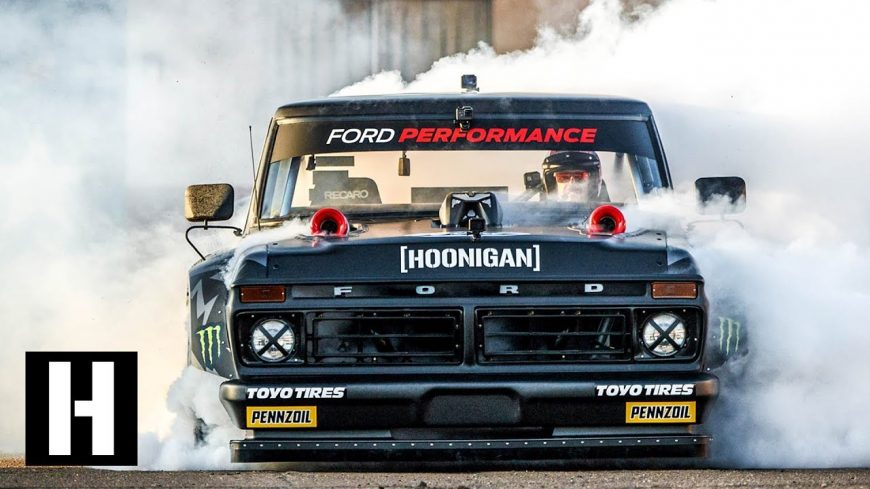 I honestly don’t even know why I’m writing this, because I know most of you that are here to watch this isn’t going to bother reading this. However, I’m hopeful a couple of you at least come back and skim this to see what I have to say so I don’t just feel completely irrelevant.

It’s Gymkhana 10 time, and as you would expect, the tenth rendition of Ken Block and Hoonigan’s collaborative insanity is absolutely ridiculous. This time, we get to see Ken behind the wheel of no fewer than five different rides, each one which brings its own set of challenges and, in Block’s capable hands, each also brings its own badassness (I may have just made that word up, you may use it as you please with my blessing).

Things start out in the snow with Block wheeling his WRC Ford Fiesta. The diminutive inline 4 banger cranks out a respectable 380 horsepower and the all-wheel drive format gives Ken all the control he needs to shred the snow-covered landscape. He’s joined briefly by sixteen-year-old phenom Oliver Solberg, who whips a few donuts around a polar bear-plunging lunatic!

From the icy north, we head to the warmer climates of Detroit, where the gnarly twin turbocharged Hoonicorn is ready to shred all four tires throughout Motor City thanks to the 1400 horsepower on tap. While Ken always exhibits extreme precision in his driving, to see him add some legitimately terrifying speed to his driving takes the insanity of what he’s doing to a whole new level.

From Detroit, we head even farther south to Guanajuato, Mexico, where Block takes on the tight confines of the city’s underground tunnels in his 650 horsepower Focus RS RX. This car, like the Ford Fiesta from the frozen opening, provides unparalleled precision, but with nearly double the horsepower, also allows Ken to hit some sketchy speeds through the city.

From Mexico, Ken heads back north to Los Angeles, where he exhibits some of the most insanely precise wheelmanship ever caught on camera behind the wheel of the Cossie, his 1991 Ford Escort RS Cosworth. While The Cossie looks like it would be the slowest of the cars in the lineup, it cranks out 645 horsepower its tiny form factor mean Ken and do things behind its wheel that he just cannot do behind the others. In a trippy sort of dream-state double-exposure session, Ken replicates his run in the Escort without tires on the wheels, sending sparks flying as he shreds the insanely precise course laid out for him.

Finally, we meet the highly anticipated Hoonitruck. Following in the spirit of the Hoonicorn Mustang, the Hoonitruck is a 1977 Ford F-150 with a 3.5 liter V6 cranking out a ridiculous 914 horsepower, thanks to the pair of turbochargers sticking menacingly out of the hood. As you can see, the Hoonitruck is as much like the Hoonicorn in performance as it is in appearance, hitting breakneck speeds while Ken puts the truck through its paces. There’s no shortage of near-miss moments that make it seem as though Block is on the verge of losing control, but as always, he knows exactly what he is doing.

While there is a tattle-tale reveal at the end, there are a few special guests that you may recognize, especially if you’re a fan of the F-series pickups and huge freestyle stunts. Oh and a certain legend of folklore fame.

Thanks, as always, to Ken and the Hoonigan team for putting together the biggest, baddest, most ridiculous Gymkhana yet! I’m not sure how they could top this one, but I’ve definitely said that before!