Kid Hops On His Custom Drag Blaster and Launches It Like a BOSS!

Kid Hops On His Custom Drag Blaster and Launches It Like a BOSS!

I’ll say right up front before I get blasted, I am very well aware of the huge safety ...

I’ll say right up front before I get blasted, I am very well aware of the huge safety issue in this video and that will be addressed before we dive into the actual video. I don’t care if you’re 8 years old or 80, if you’re going to jump on ANY quad, or any other type of powered cycle, you need to, at the very least, wear a helmet. I don’t care how tough or in-control you think you are, you aren’t in control of everything else in the world around you and you aren’t too cool to survive slamming your head on the asphalt if things take a turn for the worse. I would personally think this kid was much cooler in head-to-toe riding leathers and a good helmet than this sleeveless shirt and shorts. He also needs gloves and boots, but at the absolute bare minimum, he should be wearing protection for his head.

Now that I got that Public Service Announcement out of the way, let’s not let the awesomeness of what this kid is doing be lost because of his – or more appropriately his dad’s – lack of concern for safety. This is a tricked out, full-race Banshee quad and this kid, who can’t be older than 10 or 11, absolutely manhandles it like he’s been riding for years. Which, I guess is entirely possible considering we’ve seen videos of kids that are much younger than this little guy riding motorcycles, so he may very well have years of experience under his belt.

He has no problem kick starting the two-stroke engine and just has nothing but pure confidence as he drivers to a nearby street that looks to double as his personal test track.

Dad picks up on the wheelie bars a bit to let the drag radial tires spin over a few times, likely more to clean them than to heat them up. The tiny pilot gets hunkered down over the engine and awaits the signal to go from his younger sister. As soon as her hand drops, the kid and the four wheeler blast out of the hole toward the distant end of the street. Keeping the throttle wide open and shifting like a champ, the young rider does lay down a great looking run, then turns around and heads back for another run.

This Dirtbike Fail Compilation Will Make You Cringe! 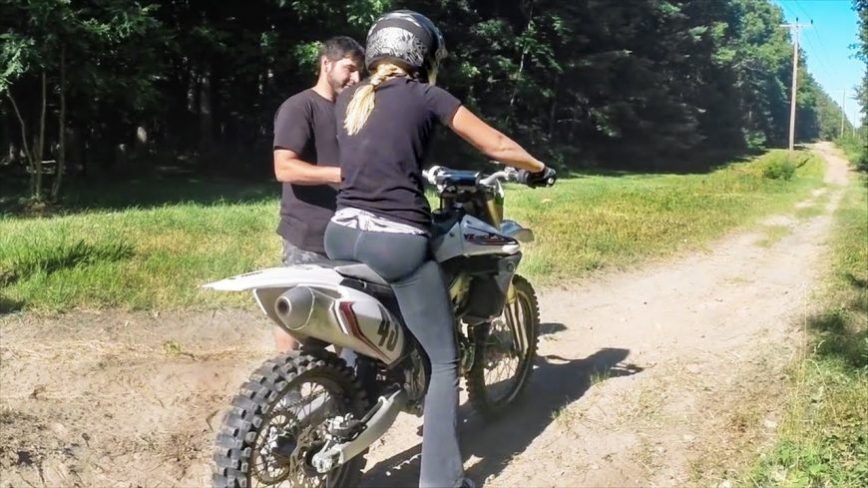