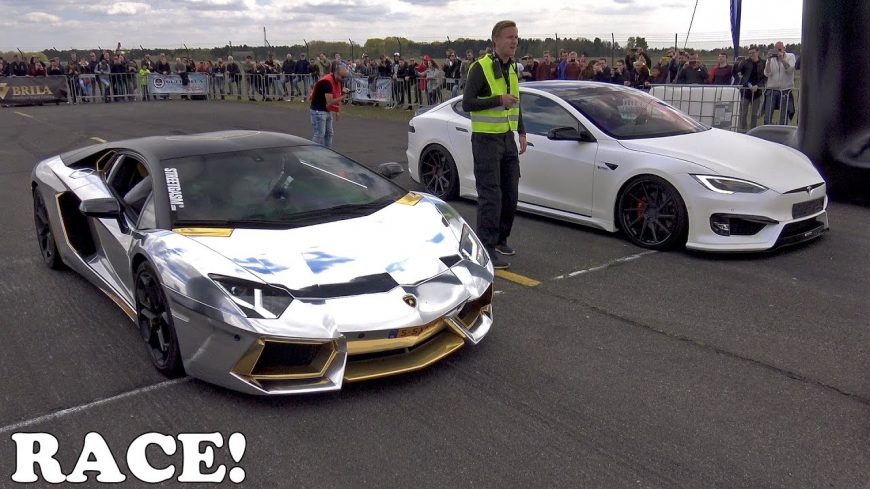 When you think about cars that are among the most impressive straight out of the box when it comes to performance, the Lamborghini Aventador is certainly a machine that you can’t go wrong with. With power numbers approaching the 700s, it’s probably more powerful than most people will feel in their entire lifetimes and that’s really saying something. You would think that, with a car like this, even in its factory format, that it wouldn’t be able to be completely dismantled by an electric vehicle, that was, until Tesla came along.

As we have seen across the racing scene, various Tesla vehicles have been showing that they have some muscles to be flexed. With insane amounts of torque that is consistent across the board thanks to all electric motors, these cars really have proven that they aren’t to be messed with, especially when beginning a race from what’s known as a dig (a stop). With all that consistent power, they’re able to really quickly get out of the hole and put car lengths on just about anything from vehicles like this Lamborghini all away up the purpose-built drag racing machines that can’t seem to get as much traction as these torque monster machines do.

This time, we have just the battle that you’re going to want to see as one of Lamborghini’s most impressive machines goes head-to-head with the electric car that almost seems to be a lock for the car of tomorrow. When all the cards are on the table in both corners, these combustion versus electric battles are almost too good to turn down. Get all dialed in down the video below to see if this somewhat common electric vehicle is able to dethrone an exotic machine that cost hundreds of thousands of dollars and is quite the head turner.