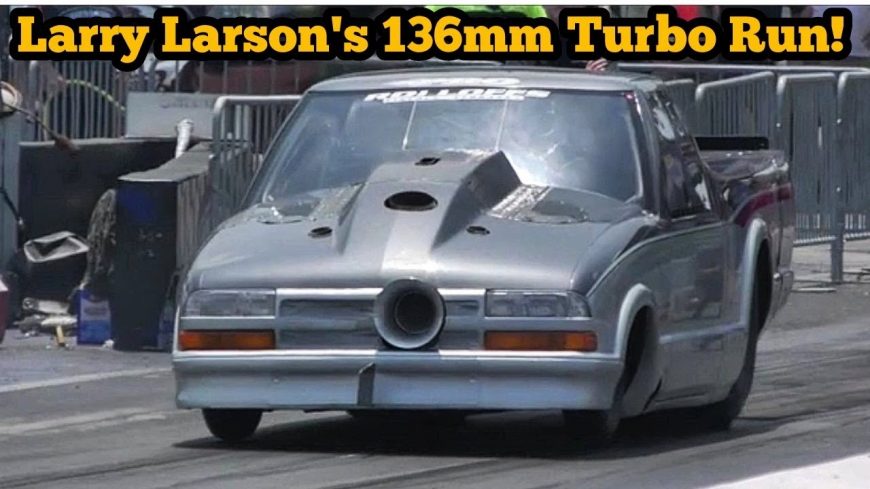 When you’re the one behind the wheel of a racing machine, you would probably want to have the least dramatic race possible unfold in your favor. Sure, drama does get your heart racing but, if you’re the one behind the wheel, I’m sure that you’re just hoping for a clean pass and for the other driver to not be able to hold a candle to what you have to offer. However, on the other side of that coin, as a spectator, drama is one of the things that makes racing so intense to watch. When you have these unlikely and precarious scenarios unfolding in front of your eyes, it really turns up that entertainment factor a little bit.

In this race, we have the one and only Larry Larson, a man who needs no introduction, as he takes his insane Chevrolet S10 down at racing surface at the No Prep Kings event at Memphis International Raceway on a solo pass. As he’s introduced a new 136mm turbo to the equation, this is really a situation where Larry is hoping for the least amount of drama possible as he ideally would like the truck to go from “A” to “B” as straight as possible. Setting this thing on some rails would really be ideal here!

If you follow along down in the video below, it might be a solo pass, but there’s really something about Larry’s killer S10 that really makes it captivate the attention and make you want to see more. In addition, the guys over at the National No Prep racing association really do a good job to bring you trackside with their camera work, allowing you to sink your teeth into this truck that has really proven to be a fan favorite over and over again as Larry really makes magic happen on the track.

« Foxbody Rides the Bumper Past the 330′ Almost Crashes, But Still Sends It!