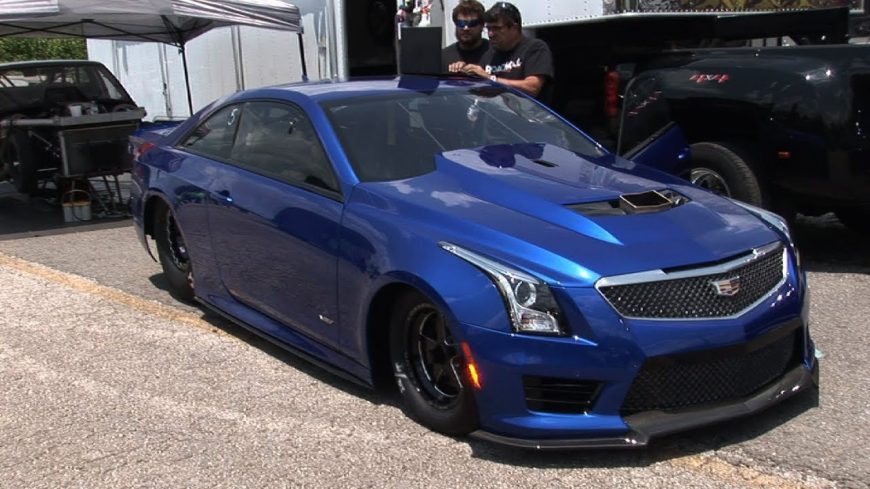 Larry Larson has become a legend in the world of drag racing. After achieving street car supremacy by blasting home the record in his Chevrolet S10, the world would never be the same. These days, Larson has decided to add yet another horse to the stable. This one is going to be powered by the same Pro-Line Racing 481x from the record-setting S10. This time, though, we see a little bit different body thrown in the mix. As if his past rides weren’t enough to demand attention, a bright blue Cadillac ATS-V is stepping up to the plate.

Every time that we see a late model ride thrown into the pressure cooker like this, we can’t help but be impressed. Obviously, this thing has some serious modification done to it in order to be able to facilitate such power. One of the neat parts of this car is that much of it retains original components. Well, that’s true, at least when it comes to the body. With that said body we see it constructed with most of the pieces that it came with when it came off of the lot. The one part that’s different is obviously the radical looking carbon fiber hood.

By following along below, we get to see the car making a couple more test passes following last weekend’s No Prep Kings debut. In this one, we join in with the action as Urban Hillbilly Action Videos is on the scene to catch the adrenaline. This machine might be new, but it’s already hooking and booking!

Be sure to be on the lookout for Larson and his stellar Cadillac to be hurting feelings at a track near you. Not only does this thing perform, but as usual, Larson’s car looks the part as well! All in all, this is one wild ride!

Check. This. Out! Racer and chassis builder Larry Larson showcased his latest creation, a Cadillac ATS-V, built for No-Prep racing at the Menards #HeartlandNats presented by Minties. It features one giant 144 mm turbo!