Launching an 800,000lb Yacht is Anything but a Walk in the Park

Launching an 800,000lb Yacht is Anything but a Walk in the Park

Normally, as you probably have seen, for a normal size boat, if you want to launch it ...

Normally, as you probably have seen, for a normal size boat, if you want to launch it into the water, all it takes is a decent truck and, of course, the right trailer. It’s really something that a single person can do and with enough practice, they can do it pretty darn well all by themselves. However, when it comes to launching a mega yacht, not only is it a mission that requires more than one person but it’s also one that requires lots of heavy machinery to go along with it.

In this one, we get taken on an inside look at all that it takes to launch a big and bad yacht, weighing in at 800,000 pounds. From start to finish, this is an effort that has to be well coordinated and planned out. Otherwise, hundreds of thousands of dollars and sometimes more are on the line as a single mishap that goes down and does damage to this super expensive boat or one like it means money lost!

It’s quite interesting to watch in as the team comes together, using all of the equipment at hand including the trucks, trailers, and even other boats to make this launch a success. We aren’t given any information as to what a process like this would end up costing in terms of labor and equipment use but if I were a gambling man, I would say that the launching process that we see here alone probably cost more than you would spend if you went out to a dealership and purchased an average boot.

You can ride along with the process down in the video below that gives you the step-by-step on exactly what a high-stress situation like this looks like. These guys really have to be on their A-game here because anything less is unacceptable when you’re dealing with a vessel of this magnitude. 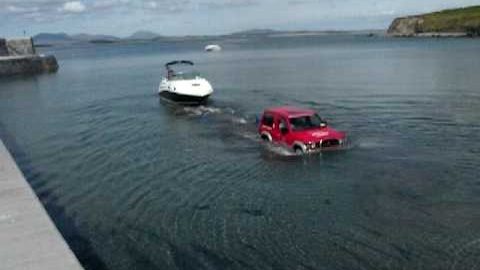