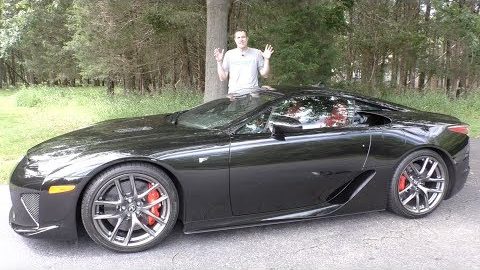 While we look at this Lexus LFA with admiration, we also have to admit that it’s quite a strange car. With only 500 ever made and asking prices of $375,000, this thing should’ve made some substantial noise. It really seems like one of those high interest machines that only a few can afford but everyone would want. Sure, we did hear a little bit about the car around its release. However, since then, there hasn’t really been too much news on the wire about the LFA. Watercooler talk fizzled out almost immediately.

Nonetheless, the nameplate still will go down in history books as one to be respected. With over 500 hp, the supercar is one that will turn heads and break necks when the accelerator is stomped down on.

When we really start to dive into the car with Doug DeMuro, we find that there’re lots of intricacies that make the Lexus one-of-a-kind. We think that having the opportunity to drive one of these vehicles is really something special. Apparently, the people who own them agree as the asking price seems to have risen just a little bit if not at least maintained its original value from the sticker price.

By following along with the video below, we join in with Doug as he gives us his once over on the machine. He even takes us for a test drive. At the end of the day, the LFA is really hard to place in any category. While many speculated that it could’ve been an early look at the next-gen Toyota Supra, we would eventually see something else entirely. As time would eventually play out, we learned of its limited supercar status. For the price tag on this one, does the LFA live up to the hype?

There’s only one way to find out and DeMuro is digging into it.