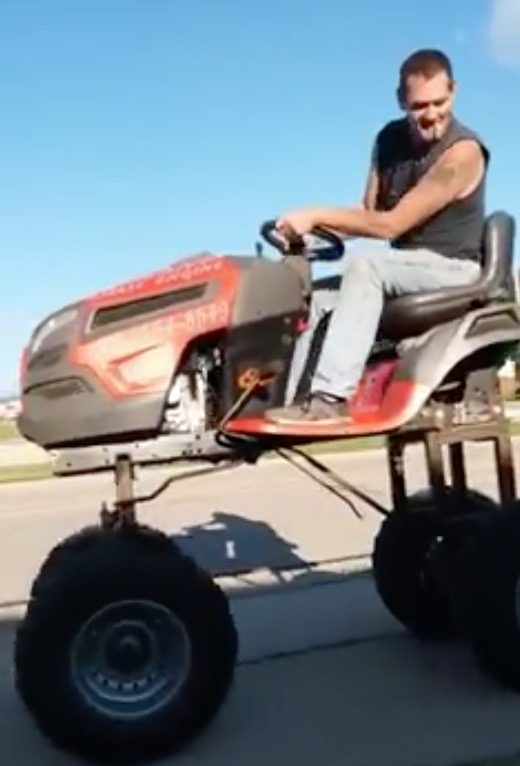 Have you ever found yourself in a situation where you’re just watching something and waiting for disaster to unfold right in front of you? There are certain times where you might just get a feeling that things are going to go poorly right from the start. It might not necessarily be attributed to any sort of physical evidence of this but perhaps it’s just a feeling that when you look at the way that something might be escalating, it just doesn’t like all the factors are going to lie just right and catastrophe is going to end up unfolding. For us, this was just that situation.

The creation here is definitely something that’s a little bit different. The people involved decided to take a lawnmower and lift it up to the sky. While most people probably would attest that this isn’t exactly their style of doing things, it certainly is a situation where you can’t knock somebody for putting an effort into materializing their thoughts. However, while these people who might’ve made their vision come to life, it turns out that the execution with the project doesn’t appear to have been as stable as they needed it to be. Somewhere along the line, something here should’ve been a bit more beefy.

If you follow along with the video below, you’ll be able to watch this massive lifted lawn manicuring machine that certainly is a lot to take in bur once you do, you’ll be able to bear witness as the driver tries to do wheelie after wheelie, actually having a little bit of success before coming down and witnessing the point at which everything goes wrong when one of the front wheels falls off and sends this thing is tumbling over. That’s going to be one that he’s going to feel when he wakes up tomorrow!