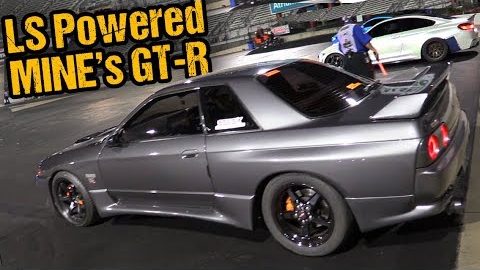 In the world of racing, one of the most common engines that we see used is the LS produced by General Motors. We’ve seen the engines in everything from Mustangs to airplanes and everything in between. We’re almost at the point where there aren’t too many swaps that would shock us. Just about everything has had the Chevrolet V8 crammed under the hood. However, with that in mind, there are definitely swaps that end up packing more shock value than others.

While the vast majority of LS Swaps start out with cheap platforms, others take a bit more risk. Naturally, a cheaper vehicle won’t cause worry about depreciation or damaging the car in the process. However, some simply seem to be willing to take on that risk.

This time, the swap proves to be one of the most controversial that we’ve ever seen. The car in question is an R32 Nissan Skyline GT-R. A normal version of this car being LS swapped might be a bit more common. However, we discover that this particular machine is MINE’s GT-R. Cars built by this particular Japanese tuner tend to bring some insane money and are highly sought after.

When the man behind it all couldn’t keep an engine in the car, though, he was downright sick of it! Therefore, he would forego the original RB26 after building it several times. It was at this point that he decided to go with something a bit more common and simpler in the LS.

By following along with the video below, we get to catch up with the story behind the swap and see it in action. According to the owner, the car ends up creating more than its fair share of opinions with some being rather angry. After catching up with the machine, tell us what you think of this controversial combo! – BigKleib34