Mad Scientist Puts A Jet Engine On His Kids Scooter! 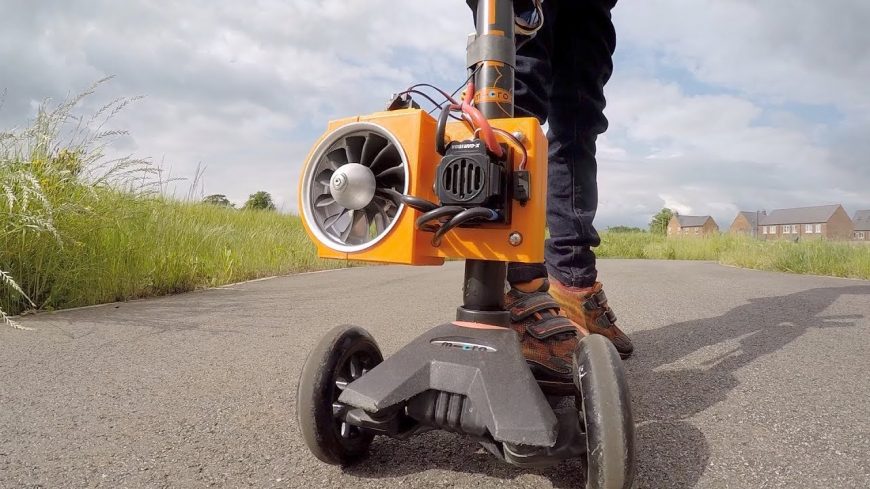 If you’ve kept up with YouTube experimenter, Colin Furze, you know that his channel is filled with nothing short of some of the craziest contraptions that the world has ever seen, all designed and put together by the man himself. It really seems like each one tops the last in their scope of how crazy they are and what each is able to accomplish. This one, in particular, really gives Furze a ride on the wild side as all sorts of combustible elements, both literally and figuratively, come together into one package that really has to give an adrenaline rush of a ride to the user.

Basically, what we’re looking at here is a highly modified child’s scooter powered by the means of a a sort of jet engine. Having put together all of the components himself, Colin compiled them into one cohesive picture as powered he’s looking to make something for his son to have some fun with, so it can’t be all that nutty… or can it? Let’s just say that his son is bound to get quite the adrenaline rush when he hops on it and goes for a spin. This thing is going to be the envy of all of the kids in school, without a doubt.

If you follow along in the video below, you’re going to see what we mean as said contraption really gives you a ride on the wild side. From what we see here, it does look like you can call this mission a success as the ride gets rolling with a nice head of steam and Colin’s son appears to be absolutely loving every second of it and we have to say that we’re a touch envious of the contraption. Good work, guys!

Would you dare to hop on this thing?