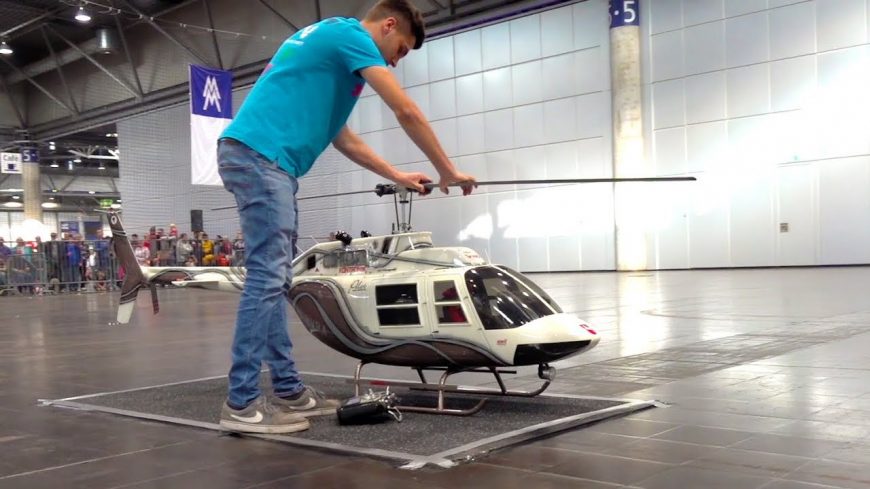 When it comes to the world of remote control creations, some of these things can get pretty ridiculous. For those unacquainted, the replicas are simply off the charts. Every last detail is paid attention to. No stone is left unturned in making the real world come to life in a shrunken down format. It’s pretty neat when we see these replicas unleashed.

This time, the machine in action is none other than a remote control Heli Jet. When we go over this machine, without reference points, we probably wouldn’t be able to tell if it was a real helicopter or not. Granted that it’s in a warehouse and we can see how it compares to the size of the people around it, it’s obvious that it’s shrunken down. However, with the attention paid to detail, if this thing were in the middle of a field, it could create a pretty deceiving illusion.

The scene of the action here is the Modell Hobby Spiel 2019. When such a community of RC enthusiasts gets together, some of the most intriguing creations seem to rise to the top. That includes this particular helicopter that really has us in awe. The best part of the video is that actually takes flight inside the building! It’s pretty neat to see how much control the operator has over the rig in such a confined space.

By following along with the video below, we’re able to get up close and personal with the mini-chopper. This is one that we had to spend a good amount of time looking over. It almost seemed too real to be a scaled creation! When it takes flight, the helicopter ends up being truly mesmerizing. We can really sit here and look at things like this all day long. Better yet, we can’t help but want to hop behind the controls!