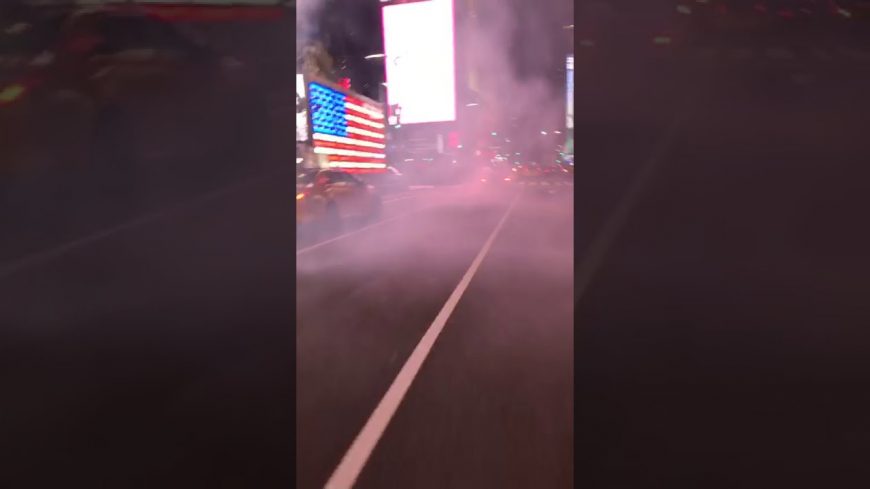 There’s ballsy, and then there’s stupid. I know which of those I think this guy is, but I’ll let you guys make the call.

What you’re looking at was recorded live in New York City’s famed Time Square. A driver in a Mercedes Benz AMG C63 is roasting the tires, putting on a killer smoke show for the ever-present Times Square crowd. All seems to be doing well until yelling can be heard. The camera turns to see an NYPD officer standing in front of the car. What seems like is about to turn into a reckless driving citation quickly turns into a scary situation when the driver starts trying to drive away.

The officer instinctively braces himself against the car to try to hold it, but we all know he’s not going to stop a car with nothing but himself, and eventually the car pushes him aside and very nearly runs him over before speeding away into traffic. The officer, as well as another nearby policeman begin a foot pursuit to try to catch up to the car, which appears to be hemmed up by traffic. The driver just squeezes through an opening and drives away again, making a right turn onto another street, where traffic seems to be at a standstill, seemingly leaving him with no escape.

However, showing a measure of desperation not typically seen by someone who was doing burnouts in Times Square for fun just a few moments earlier, the driver apparently wedged his way though two lanes of traffic, pushing cars out of the way with his Benz to force his way to open road, where he drove off into the night. It seems safe to assume this driver either has warrants for his arrest or was driving a stolen car – or perhaps he wasn’t supposed to have dad’s Benz out while pops was gone on vacation? – and for whatever reason, you can bet it’s going to be really hard to get an AMG Benz with heavy body damage on both sides fixed without raising suspicion.

Guys, take a little advice: if you have warrants, or if you’re driving a stolen car or borrowed daddy’s wheels without asking or anything else that would make a routine traffic stop into a much bigger problem, don’t do something so ridiculously attention grabbing that you’re guaranteed to get pulled over if the cops just happen to see you!

« Cops Let You Get Away With Anything if You Drive One of These!