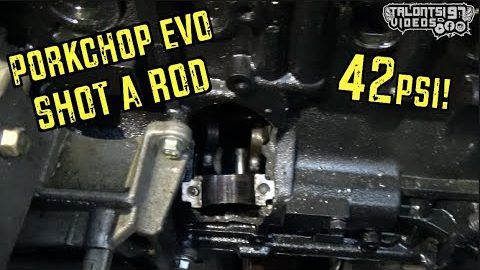 As unfortunate as it is, sometimes, blowing things up is just a part of racing. When we put all kinds of different components to the task, really stretching out their capabilities to see what they can do, failure may be right over the horizon at any moment. Look at the bright side, though. It’s a lot of fun to push some of these parts to the point where they can no longer function. Right?

This time, we check in with a street race between a Mitsubishi Evo and a Cadillac CTS-V making 1000 hp. The throwdown in the streets between the sedans has us pretty pumped up. At the end of the day, seeing these big family haulers going out one another with some major horsepower under the hood is definitely enough to get our adrenaline pumping to push us through the late-week lull and toward the weekend.

However, things didn’t exactly go according to plan.

When the pair of four-door monsters lined up one next to one another, things were going as they would on any other roll race. However, after honking it off, the Mitsubishi would almost immediately spew fluids in the air. That’s almost never a good sign. However, almost immediately, we’re left to wonder what the strange mist consisted of.

After the incident, the driver of the Evo would navigate to a safe place to stop and check things out. In what is near a worst-case scenario, popping the hood would reveal a gunky, oily substance. Tracing the substance to the source, the owner would find that a hole had been blown in the side of the engine block. That’s one way to ruin a night, for sure.

The video below from TalonTSI97, as shot from multiple angles, takes us inside of the moment that got rather intense in a hurry.

« Inside the Upcoming 2022 Jeep Grand Wagoneer – Inside and Out!