Mix Cummins and Cadillac, the result is legendary! 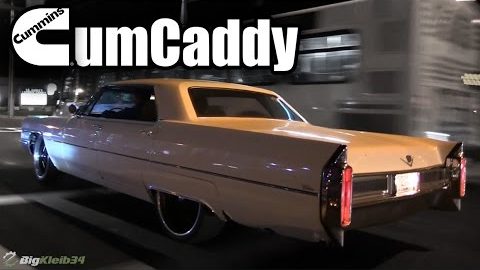 In the world of rides, there is a swap for every preference and budget. Whether you’re looking to make big power, big torque, or just do something cool, there’s something out there that will make you raise an eyebrow.

While many choose to go with the tried and true (how many LS swapped Fox Bodies have we seen?), others deviate outside of the realm of normal and go for gold in terms of coming up with the most unique and different combination that they can find that will make for an exciting to drive car that also happens to turn heads. There’s nothing wrong with picking out a combo that is proven to work, but something like this really sparks up the interest and throws that razzle dazzle wow factor into the mix to make the whole crowd stop and stare.

This time, we roll out to Ocean City Maryland’s Cruise weekend to check out a build that certainly gives us a taste of different as it demands the attention of everyone who sees it as they wonder what it took to drop that inline six into the engine bay of this classic.

While we may have seen one or two builds similar to this one before, most notably, Roadkill’s Cummins swapped Cadillac, we can’t say that you’re going to see too many of the sort.

Under the hood of this land yacht is none other than a Cummins diesel, one of the most torquey six cylinders that you can get your hands on, normally found in a Dodge Ram 2500 or 3500, but definitely not in a Cadillac like this.

While the owner tells us that he just picked the car up off of eBay and didn’t do the wrenching himself, we have to say that this is one cool and attention grabbing build no matter who torqued down the bolts!

Check out the BigKleib34 video below as the hoodless wonder puts its way around town and even draws some unwanted attention from the police as they search for a vin number. Luckily, the driver was let off with a warning and was let to go about his #CumCaddy business.