Thanks to the high-octane show at Monster Jam events, monster trucks have gone from ...

Thanks to the high-octane show at Monster Jam events, monster trucks have gone from big, lumbering sideshow attractions to high-flying freestyle main event-style shows. Soaring through the air, hitting huge slap wheelies, and event wowing the crowds with backflips are all common for these hulking beasts.

Of course, when you’re tossing about tons of metal and rubber, things can take unexpected turns, and that usually ends in quite a bit of carnage, since these trucks are designed to break apart in certain areas and remain rigid in others to protect the driver and the drivetrain when possible.

This truck, rocking a badass American Flag motif, is attempting to hit a backflip off a mound of dirt with a container placed on top to help kick the front end over backwards. If you watch Monster Jam, you’ll see similar obstacles placed in the arena to give the drivers a chance to send the fans into a frenzy, because who doesn’t love a backflip, regardless of how it turns out?!

However, as you can see in this extreme slow-motion video, things don’t go exactly as planned, although the result is still quite spectacular even if the truck does end up on its roof. The driver hits the jump just a tad slow, or doesn’t kick the throttle at just the right time, causing the truck to under-rotate and land nose down. With his foot still in the gas, the front wheels grab and spin the truck around onto it’s tail end, leaving both ends of the body destroyed and the truck rolling over haphazardly onto it’s roof.

Luckily for the driver, the full roll cage is sturdy and well built, and looks to hold up exactly as planned, leaving him dangling upside down in his harness, but likely completely unharmed. Other than a hit to his wallet and the need for a new body, I have to say this went about as good as a failed back flip can go. 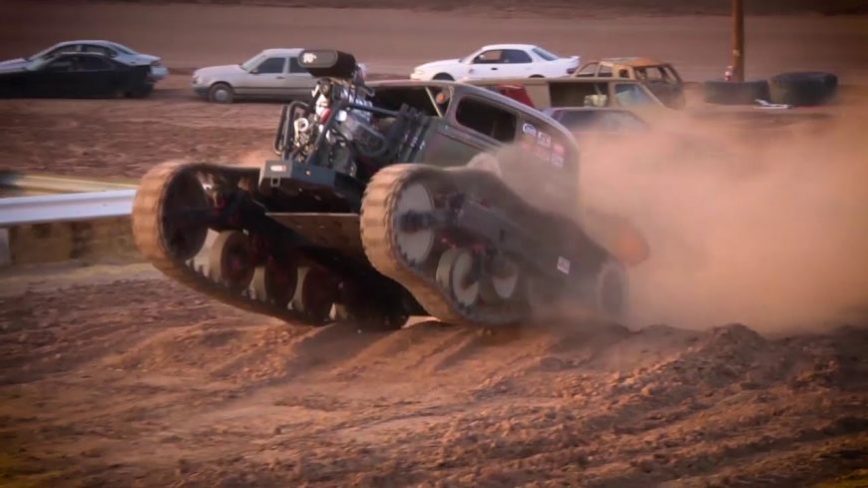