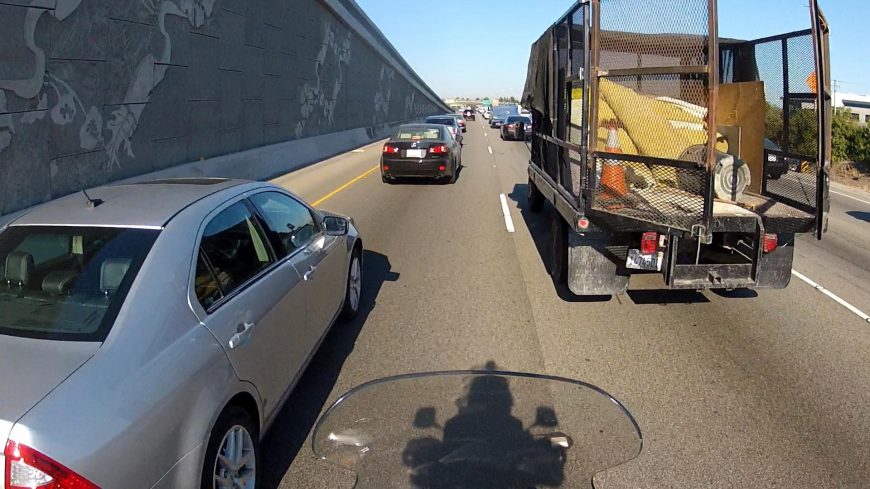 If you’re one of those people who is ready to head out and hit the open road on your motorcycle, it can be an incredibly exciting time to explore the world on two wheels. With that freedom also comes a heightened responsibility as, when you’re out there on a bike, there are lots of dangers that could be lurking right around the corner. With no protection around you, just about anything can happen as drivers who aren’t aware of their surroundings can plow into you without even noticing.

This time, we check out a situation that has a motorcycle rider on his toes as he happens to be rolling down the freeway when a truck door gets in his way! In this one, the motorcycle rider is observing a maneuver called lane splitting were basically, you go in between two lanes to avoid getting stuck in traffic. In many places, it’s completely legal, however, should you lane split, you should probably keep your head on a swivel because there are tons of drivers who aren’t aware that you’re doing it and also other drivers might be a little bit angry at your attempt to jump up in the line. Regardless of if it’s right or not, other drivers could act out on a situation like this with rage!

In this one, it isn’t a road rage situation unfolding but instead, it looks to be a complete accident as the driver of this truck might’ve just left his rear door unhinged, leaving the giant slab of metal to fly open in traffic, banging into the motorcycle rider as he proceeds to go by the truck. Luckily, the situation appears to have caused minimal damage, if any, allowing this rider to continue along on his way. This video demonstrates just one of the many possible obstacles that could come should you find yourself on two wheels. We urge everyone, motorcycle rider or not, to be aware of your surroundings out there make sure that everybody is safe.

“The California Office of Traffic Safety (OTS) released results of the first-ever survey of California motorists and motorcycle riders on the subject of “lane splitting,” ”