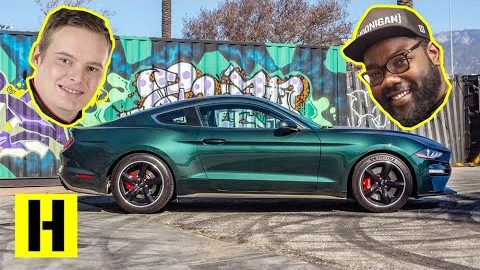 So I’ll admit, before this video, I hadn’t heard of up-and-coming NASCAR wheelman Cole Custer. However, I had heard his name somewhere before, but I didn’t remember where until they Hoonigans brought up the time he tackled another driver following a rowdy finish in a Truck Series race. I knew then that I had seen that clip before, and that’s where I had heard Cole’s name.
The more I watched of this video from Custer’s visit to the still-very-much-new Burnyard, the more I became a fan of Cole and his laid back SoCal attitude. Much like Jeff Gordon, who would go on to become one of the most successful NASCAR drivers in the sport’s history, Cole hails from the west coast, where things are just different than they are here in my beloved Southeast.
For Cole’s visit to the barnyard, the Hoonigan crew have a special ride for him to use for his tire-shredding festivities since his #00 Mustang was undergoing race prep for the Xfinity Series race, which Cole would go on to win. A brand spankin’ new Bullitt-edition Mustang would be Custer’s ride of choice for the day, and with 480 horsepower on tap and some fresh new Michelin tires to shred, he wasted no time in getting the smoke show rolling.
As soon as Cole slid behind the wheel, he laid down a nice long smoky rolling burnout, slid through a smooth 180 degree turn and headed back toward where the began, all the while maintaining complete and total control over the car despite it being on the edge of spinning out into a gasoline-fueled donut show at any given second.
Cole then cut out across and around the Burnyard, sliding between all the awesome obstacles and just generally raising hell and melting the heck out of those meaty rear rubbers.
After Custer has had his fun, Hert takes the Bullitt for a spin around the Burnyard too, just because why not? What a great way to end the day!

« This Mclaren Took Longer To Build Out Of Legos Than The Actual Car!