NASCAR Takes it to the Half Mile? Racing a GT-R, Porsche, Roush Mustang 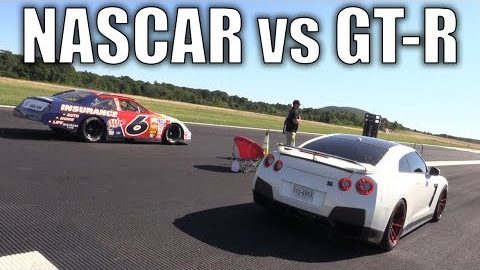 When you take a look at the field of cars that is normally at a half mile event, most of the pack will look a little something like what you see at a drag strip with a couple of more high dollar exotics mixed in for good measure. This time, however, we check out something that I can’t say I have ever personally seen going down at a half mile event and might even be the first of its kind as a stock car makes its way down the racing surface against a variety of competitors that might be recognizable on the street. Watch in on the mixed platform matchups like this that end up being really interesting to see.

In this one, check it out as a NASCAR stock car goes head-to-head with a Nissan GT-R, a Roush Ford Mustang, and even a Porche! To the untrained eye, this might seem like an unfair race that’s slanted in favor of the machine that’s built for speed and nothing else but, when it actually comes down to it, these races end up being a lot closer than you might imagine. Some of the street cars really give the NASCAR a run for its money as the races come down to the line! Will we see one of these street machines edging out the purpose built race car? I guess there’s only one way to find out!

Check out the video down below as BigKleib34 cameras take us on the scene of the WannaGoFast half mile in Hot Springs, Virginia that offers up a fresh and unique twist on traditional half mile racing. If you could put any sort of machine out there to go up against any other sort of machine, what would your ideal dream matchup be? Personally, I can think of more than a couple of movie cars that would probably be fun to watch rip down a half-mile of racing surface.