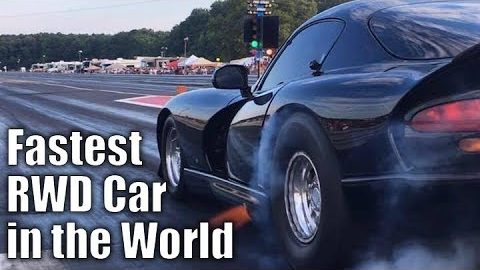 In the landscape of racing today, it seems like half-mile racing is truly dominated by the likes of the Lamborghini. Over and over again, we see another Underground Racing machine snatching up real estate as they take home records, left and right. While rocketing to speeds of 250 mph with many other cars nearing those speeds, these are hard to touch passes and as such, the AWD beasts are pretty much reigning over the scene. However, hot on their heels is a rear wheel drive machine out of the great state of Delaware, a Dodge Viper that has managed to muster up enough steam to claim the record as the fastest rear wheel drive car to ever hit the half mile surface.

After living out a life as an Outlaw racing legend, this sinister Viper is looking to lay down the law in the half mile realm as well. The video below doesn’t show Sal Patel’s record setting 237 mph pass but instead, brings us the action from the latest out of the Dodge Viper as it climbed the mountain at Ingalls Field Airport to slam its way down the half mile of airstrip at the WannaGoFast event in Hot Springs, Virginia. Right off of the trailer, the Viper shakes down and manages to put together 215 mph in his first half mile jaunt of the day. Afterward, the passes get quicker and quicker until the point where it musters up 229 mph. It will be interesting to see just how far this Viper can go as it gets pushed along and the team gathers together even more data to get the car dialed in out there.

Check out the video below to see the latest and greatest from the twin turbo machine as it is piloted down the airstrip, putting together a head of steam that’s tough to believe that you’re seeing with your own two eyes. When you’re given that finish line perspective from the rolling BigKleib34 cameras, you can really get a good idea of how fast this thing is moving as it pushes it’s way past the finish line beams in a flash.

« Travis Pastrana: My night Terrors are Getting Worse