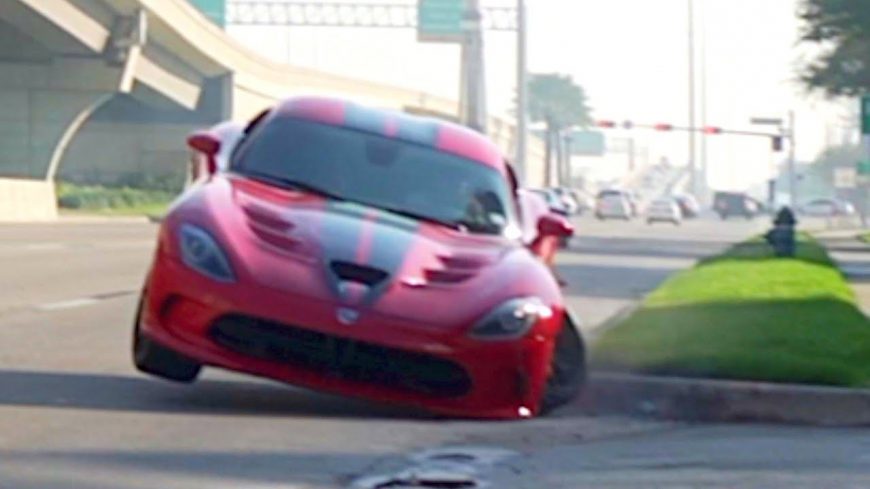 You would think that this had happened enough by now for people to have learned not to do it, but for whatever reason, it just keeps happening.

At Cars And Coffee in Houston, the owner of this gorgeous red Viper was making his way out of the venue and decided to throw down on the throttle and let the monster V10 engine loose for the crowd of onlookers. While we can certainly understand the temptation to put on a show for the people watching, who definitely do their own part to try to get the drivers to show out, we can’t wrap our heads around how often these drivers lose control of their cars. Almost on cue, the tail of the Viper slides out to the left and the car spins almost 180 degrees before slamming into the curb with a sickening thud.

The crowd, all of whom thankfully were out of harms way, immediately began laughing at the driver, who was unharmed in the crash. The reaction from the spectators seems a little excessive considering what had just happened, but we also understand their response after having seen countless videos of this happening. You really can’t help but laugh at the guy, who’s almost certainly seen at least a few of these videos, becoming the star of his own clip.

As far as the car itself, the damage looks to be pretty severe. The drivers side front wheel was knocked completely off the car and the rear end was most likely knocked out of center when the rear wheel stuck the curb. It’s hard to say what else was hurt on the car, but it seems inevitable there is a good bit more damage underneath the car.

Hopefully this driver learned his lesson, and maybe some of you can take away a little knowledge from this too. We understand that desire to be the star of a viral video, but you don’t want it to be for something like this.

« The Most Unique Tow Rig We Have Ever Seen!