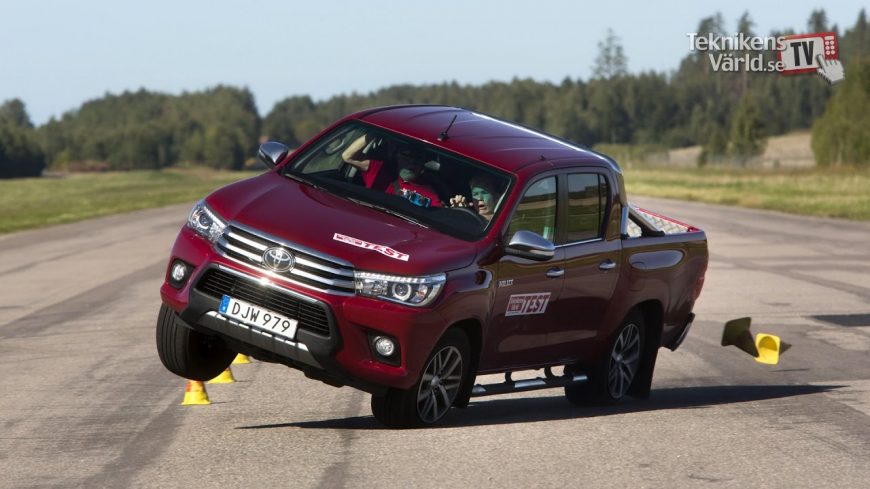 In the “Moose Test,” a vehicle is put to the task of seeing how it will respond when reacting to a suddenly appearing obstacle. Now, obviously, the tester knows that the “obstacle” is coming but the point of the test is to see how the car reacts after immediately swerving.

As you could imagine, with trucks and other top heavy vehicles, this test could prove to be both important and difficult. Reacting to a last-second obstacle could end in a rollover for this vehicle demographic which is obviously something that you would want to avoid.

Now, a truck that has proven to be historically bad at maintaining balance in this test is the Toyota Hilux and this 2016 version of the test proves that not too much has changed.

While a variety of competitors skid through the test with flying colors, the Hilux can’t seem to want to stay firmly planted on the ground. In a real-life situation, this could make things get more than just a little bit hairy! Check out the video below and tell us what you think of the result of such a test!

What is a Moose Test?

The evasive maneuver test is performed to determine how well a certain vehicle evades a suddenly appearing obstacle. This test has been standardized in ISO 3888-2.

Forms of the test have been performed in Sweden since the 1970s. The colloquial and internationally better-known name for the test was coined in 1997 by the German newspaper Suddeutsche Zeitung after the Swedish motor magazine Teknikens Varld flipped a Mercedes Benz in a test ostensibly made to measure the car’s ability to avoid hitting a moose.

In reality, the test is rather constructed to simulate, for example, a reversing car or a child rushing out onto the road. This is because it is more likely that the moose will continue across the road than remain in place or turn back, making it more advisable to brake hard and try to slip behind the animal than to swerve in front of it.

The test is performed on a dry road surface. Traffic cones are set up in an S shape to simulate the obstacle, road and road edges. The car to be tested has one belted person in each available seat and weights in the trunk to achieve maximum load.

When the driver comes onto the track, they quickly swerve into the oncoming lane to avoid the object and then immediately swerves back to avoid oncoming traffic. The test is repeated with an increased speed until the car skids, knocks down cones, or spins around. This usually happens at speeds of about 70–80 km/h (45–50 mph)