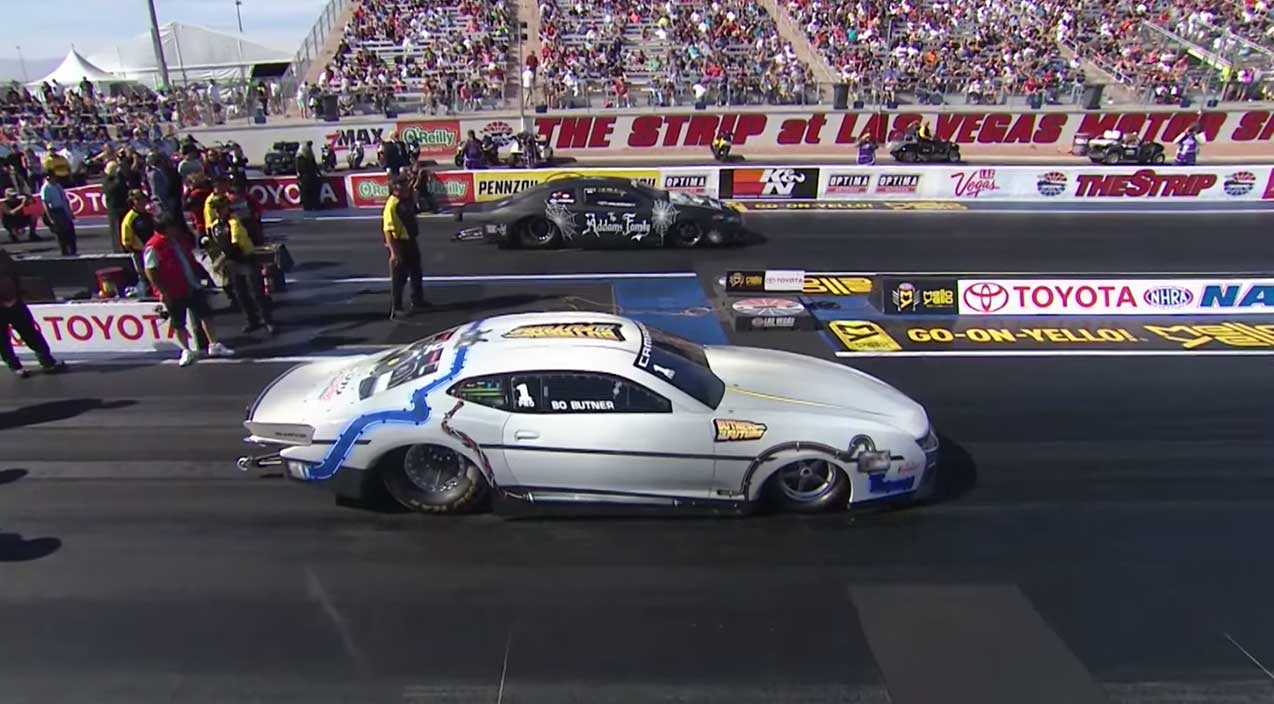 For the past several seasons, several NHRA Pro Stock teams have taken full advantage of the fact that the fall NHRA Vegas race happens to coincide with Halloween, using the spooky holiday as an excuse to have a little fun while putting on an awesome show for the fans out west.

Reigning world champion Bo Butner is always one of the drivers who takes full advantage fo the opportunity to cut loose. In years past, we’ve seen Bo show up in Vegas with his car dressed as “The Bandit” and “The General Lee”, with his crew fully decked out in movie- or show-specific costumes to accompany the costume for the car itself. Butner has even gone as far as to have special t-shirts printed with the custom costumes to make sure fans have the shirt to go with their memories.

This year, Butner again led the way, decking his Camaro out in a custom DeLorean wrap that made the car look like it’s on-screen counterpart from the Back to the Future movie series. Bo even had some custom boxes made that sat atop the spoiler that perfectly mimicked the rear of the car made so famous by the trilogy, as well as great costumes for his crew.

Alongside Butner, Alan Prusiensky wrapped his Dodge Dart-bodied car in an Addams Family getup and had his crew guys all dress as members of the famous spooky family. The spider-webbed wrap may not have looked like the car from the show, which would be nearly impossible to pull off with just a wrap, but it certainly looked awesome and the costumes were incredible as well.

Deric Kramer, who has also participated in the costume contest before, decided to follow the super hero route and wrapped his Camaro in a classic Batman theme. The slick black wrap with the throwback Batman emblems looked killer and he too had some great costumes to accompany the car as he make his passes throughout the weekend.

While Pro Stock has admittedly struggled to retain its fan base over the past few seasons, this weekend is one time the factory hotrods really take the spotlight!

You know it's Halloween at the Toyota Racing #VegasNats when you have Butner to the Future, The Addams Family, and Batman! A.K.A. Bo Butner, Alan Prusiensky, and Deric Kramer.Tune into FS2 and FoxSportsGo.com at 5p ET for LIVE qualifying.