Nikola Semi Truck on Tesla’s Heels with 4x the Range and 0 Emissions but Will it Blend? 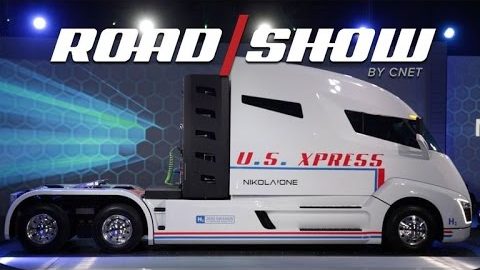 With the current wave that you have seen from the automotive industry, it really looks like most companies, big and small, are putting more and more of an emphasis on making sure that their vehicles are efficient, not just getting the best gas mileage possible but also using alternative fuels like electric and hydrogen. We have really seen this new wave pushed along by Tesla and since then, other companies have been hopping on the bandwagon, or at least trying to. This time, we take a look at one of those possible competitors as they have come out with a semi truck that promises zero emissions.

The stat sheet on this one seems to be incredible, as the Nikola Semi Truck, slated to start production in 2020, is a monster in its own right that cranks out 1000 hp, 2000 lb-ft of torque, and has a 1200 mile range, all while spitting out zero emissions. The story comes conveniently slightly before the unveiling of the Tesla truck that’s supposed to have the cover ripped off soon.

The strange thing here is that, while Tesla is usually the benchmark, the Nikola promises about four times what the rumored range of the Tesla version will be. It really looks like this collaboration between Nikola and Bosch could prove to be yet another possible competitor for Tesla in this emerging market. However, it’s not going to be until they come out and we see real-world results that we’re going to be able to make a judgment.

The video below spills the beans on everything that you could possibly want to know about what this truck is going to have to offer and how the company plans on hitting the market by storm. Do you think that there could possibly be a competitor for Tesla this early on in this market or will Tesla run away with market share while the others are left to play catch up? Only time will tell how this battle of the brands will unfold in a space that seems to be rather unfamiliar.

« This Train Like Wave Machine Creates The Perfect Wave!