There is a list of people out there whose lives wouldn’t change if they had ...

There is a list of people out there whose lives wouldn’t change if they had $1,000,000 extra in the bank. That list is rather small, though. Now, just imagine the thought that you could’ve driven past a box filled with nearly $1 million in cash inside.

We’re willing to bet that the motorists who drove past nearly that much cash sitting on the side of the roadway certainly could’ve used it. As it just so happened, alongside a California highway, that situation would come to life. The story almost sounds like the plot of an action movie.

It all unfolded on May 1, 2020. A California Highway Patrol officer and their K9 would observe a trio of SUVs that looked to be traveling together and creating traffic violations, says the official release from CHP. After seeing this, the officer would attempt to stop one of the vehicles. It was at this point that the 2020 Chevrolet Suburban would fail to yield to the officer’s lights and sirens.

The pursuit was on.

According to the release, one of the other SUVs, a Ford Expedition attempted to block the officer by straddling lanes. The would be able to out-maneuver the SUV, though, in pursuit of the Suburban. During the pursuit, the Suburban would pull over at one point and try to ditch a pair of cardboard boxes.

What was inside? Surely it had to be some sort of drug paraphernalia.

While it wasn’t the drugs itself, cash that was believed to be linked to a marijuana purchase was in the boxes. To be exact, there was $915,000 inside. After leaving the boxes behind on the shoulder, the driver of the Suburban would surrender.

The Merced Communications Center says that they received several 911 calls about the boxes during the ordeal. Inside with the cash, officers would also discover walkie talkies which they believe the suspects were using to communicate.

Finally, the post informs us that “K9 Beny subsequently alerted to the odor of narcotics on the currency and it was later discovered the suspects were traveling to northern California to purchase marijuana. The suspects were arrested, and felony charges are pending.”

Jeep gets stuck atop makeshift ramp on border fence 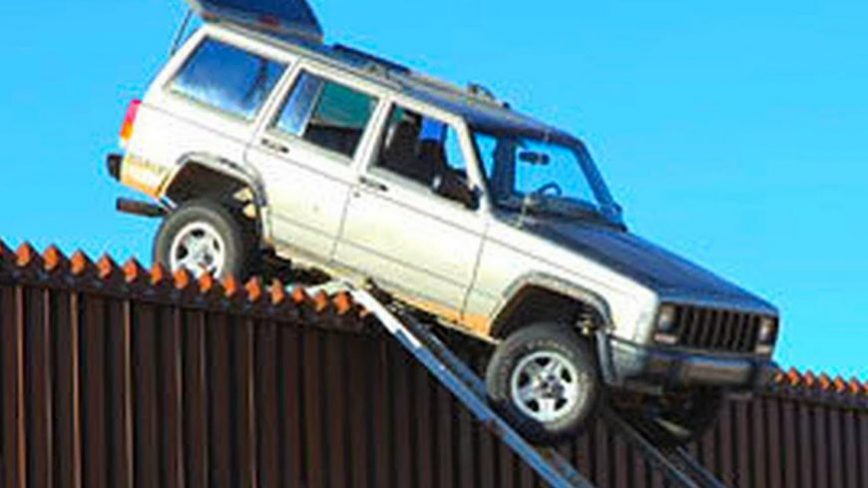