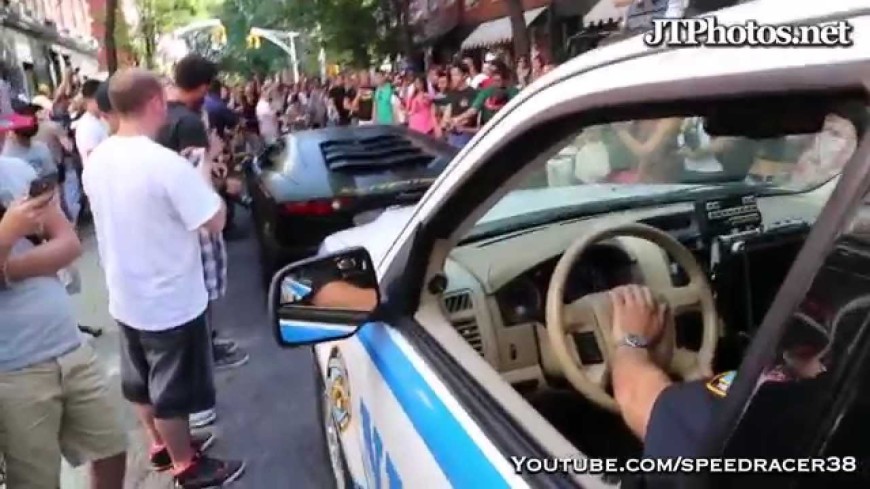 “**The audio of this video may be extremely annoying to listen to but that’s what makes this story** Thank you for watching.

This summer goldRush rally ended in New York City and the crowd greeting the cars at the finish line was far beyond what anyone expected including the police. After traffic pretty much came to a stand still due to spectators blocking the street to take pictures and look at the cars the police were fed up and decided to take out their frustration on the next car that passed which happened to be a nice lady in her Lamborghini Aventador. It was clear that they wanted the car out of the way but when they couldn’t even control the people to stay to the side to make enough room for the Lamborghini to drive through they just blasted their siren instead of taking 2 seconds to understand the situation and giving the “Batventador” a break. The cop driving the car blasting the horn behind the car was starting to annoy everyone on the street and was making the situation worse. Thankfully after a few minutes his horn stopped working and quite a few people cheered and laughed at him. Finally the Lamborghini arrived to an open and legal parking spot but the police forced her to keep driving and threatened to tow her car if she parked in the perfectly legal spot. A few minutes after this entire situation another group of cars not involved with the rally drove in and parked in that exact spot without the police saying anything about it.

I can see the cops point of view in this situation, but they should have gone about it in a much more professional manner which wouldn’t have made them look like complete assholes.”