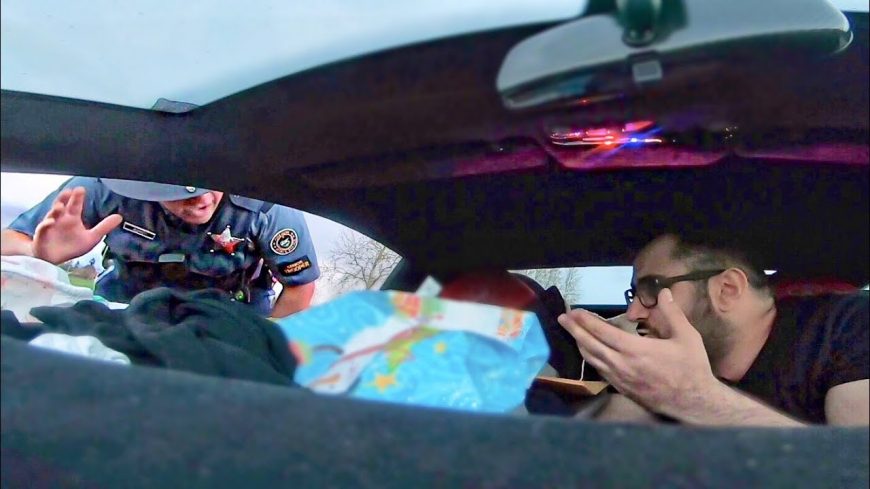 Before I dive into this video, I feel it only fair that I point out that we here at Speed Society have nothing but the utmost respect for members of the law enforcement community. We know very well how stressful, demanding and dangerous their job is, and we understand that the vast majority of interactions with the police are positive, or at least neutral, and that those widely go unnoticed, while any negative interaction is spread as far as possible, often painting the LEO community in a negative light to the general public.

This YouTuber, whose channel is called Stig’s Persian Cousin, was driving his car in Oregon when he was stopped by a state trooper. The officer stopped him due to his plates, which are from Dubai, and the interaction can be seen in the video below. Needless to say, while it didn’t escalate to an arrest or an act of violence on either party’s behalf, this interaction didn’t go very well.

Without researching the legality of the matter, I can tell you that if you have the money and the patience, you can, in fact, ship a car from overseas and drive it, legally, in North America. This particular car was shipped to Canada and temporarily registered there, but I am fairly certain you can do the same thing in the US.

However, the state trooper seems convinced that our YouTuber is in the wrong, despite being given every piece of documentation that he asks for, including a temporary vehicle registration, international driver’s license, and proof of insurance. The officer is defensive, standoffish and downright indignant, closed minded to the fact that he may be in the wrong. Then he comes back to the car and abruptly dismisses the driver, claiming he’s gotten another call, when in reality he likely came to realize the driver was, in fact, within his legal rights to be driving his car in the US.

We aren’t trying to add fuel to an already raging fire, but if this officer had simply listened to the driver, checked out his documentation, and kept and open mind, he could have had a positive interaction where he learned something new about the law and given this foreign driver and much more positive impression of our law enforcement community. While this is certainly an uncommon situation, that’s no excuse for being rude and defensive.