There were many great looking, well built cars at last weekend’s Lights Out X, but ...

There were many great looking, well built cars at last weekend’s Lights Out X, but there were a few that really stood out, and Justin Malcom from the JMlacom2004 channel just happened to catch some great footage of one of them throughout the weekend.

I kept hearing about “that brown Mustang” throughout the race, but I didn’t realize this was the car everybody was talking about because there’s so much more to the gorgeous paint on Tim Essick’s Mustang than “brown”. I would call it more of a Root Beer, with tons of metal flake that really causes it to shift shades, especially in the sun. When the light hits it just right, it looks almost like wet honey.

I heard from a couple of sources that Tim actually did all of the work on this car himself, and when they were sharing this info, they went into detail. It turns out, if the info I was told is correct, Essick actually bought the car as a “body in white” from Ford and built the chassis himself, including installing the go-fast suspension, building the roll cage, and fabricating everything needed to drop the ProCharged engine under the hood.

Not only that, Essick actually built the engine himself as well, if my sources are correct, even going as far as doing the machine work himself before assembling the bullet and bolting it into the car. As if that weren’t impressive enough, the also did the body work and painted the car himself, and let me tell you, the paint on the car is f-l-a-w-l-e-s-s. I walked around the car in staging a couple of different times and despite being a bit of an unusual color, it is absolutely gorgeous in person.

The car was built to run on a 10.5″ slick, so instead of making the switch to radials for Lights Out, he brought the car as it sat, slicks and all, and actually made some solid runs, which is not all that common considering slicks and radial prepped tracks do not play nice.

Huge props to Tim for building such an awesome ride, and having the skills to do it all himself. There are very few guys out there who can say they basically built a car from the ground up themselves, but Tim certainly can!

This is one of the best looking race cars I've ever laid eyes on that was at Lights Out 10 and that Procharger is icing on the cake! And it's still getting it done on slicks! 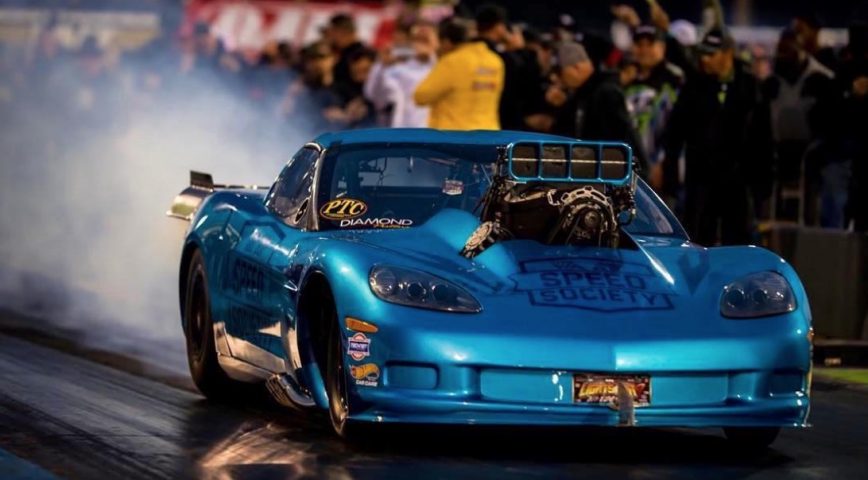