Police chases are, by their very nature, dangerous situations. Even if the roadway is ...

Police chases are, by their very nature, dangerous situations. Even if the roadway is completely void of other traffic, there is a very real danger to both the fleeing suspect and the officers in pursuit just from the speeds involved.. However, if you take an already tense situation and add in four lanes of moderate traffic, intersections and an excursion through a shopping center parking lot, and you have the makings of a ridiculously dangerous scenario.

Even keeping in mind that officers are trained for these types of pursuits, I can’t help feel like continuing to chase this suspect through these crowded streets was at the very least irresponsible, if not downright reckless of the police department. I’m certainly not one of those folks who view everything the cops do in a negative light, nor do I seek out opportunities to question their judgement. I just believe backing off the pursuit and letting this suspect have a little space until he reached an open road or at least a section of roadway with no traffic would have been a little more responsible.

However, it does seem that the officers managed to end the chase successfully without causing any collateral damage, so obviously they completed the task at hand.

I couldn’t help but laugh at the suspect as the chase came to an end as he threw his hands into the air but kept his foot on the gas. The rear tires are still spinning, pushing the truck against the police car wedged against it. Finally, the officers manage to breach the truck and kill the ignition, which allows the suspect to be taken into custody. While this ended up with a satisfactory outcome, all it would have taken was for one innocent motorist to have changed lanes or pulled into one of the intersections where the chase proceeded through red lights to cause this to have a drastically different outcome.

Why is this Cop Driving 100+MPH in the WRONG Direction? 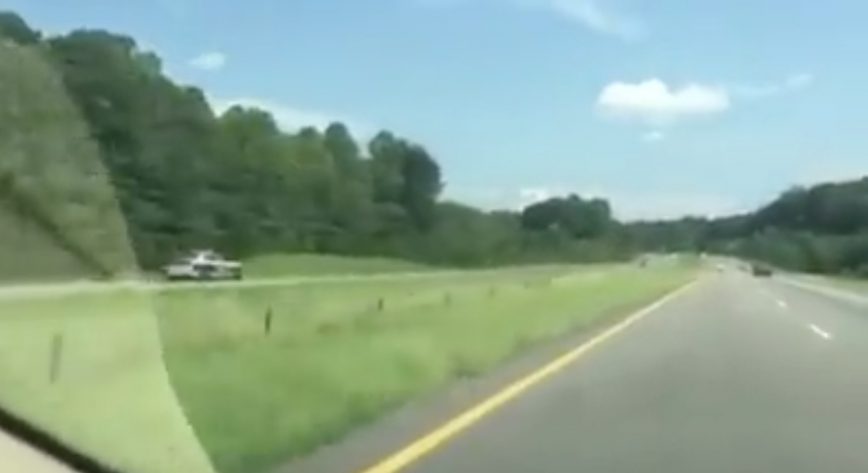