Pouring Double a Truck’s Payload Worth of Concrete Into Aluminum Bed (13,000 LBS!) 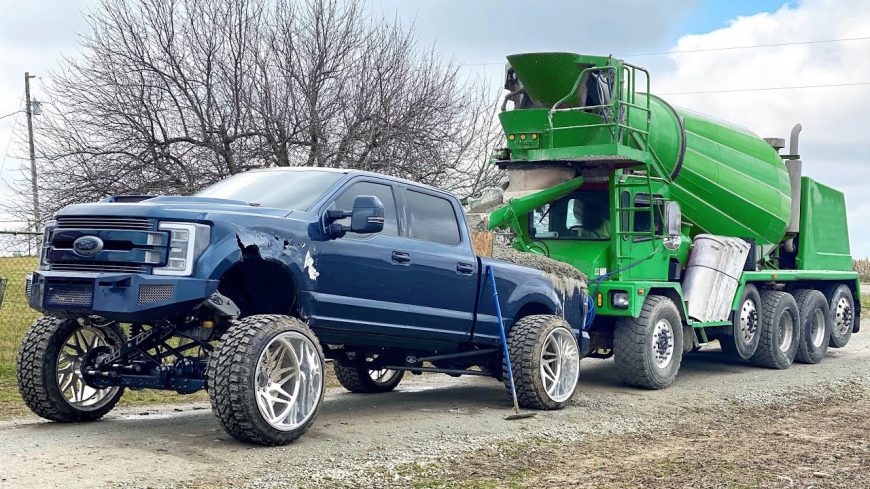 Ladies and gentlemen, the WhistlinDiesel YouTube channel is that again. For those unacquainted, the entire concept behind this channel is pure destruction. It seems to keep us coming back as this destruction surrounds some pretty expensive and sought-after trucks. As the name insists, as far as we’ve noticed, all of these trucks are diesel-powered.

Let’s just say that the purely destructive nature has stirred up quite the controversy around the internet. One glide through the comment section will show that the videos can be rather polarizing. On one hand, we find people who enjoy the mayhem. On the other, folks criticize the acts while simultaneously fantasizing about what they would do with the trucks.

The latest machine to be put through absolute hell is none other than a Power Stroke built for SEMA. Fitted with all sorts of custom high dollar components, this truck has really been put through the wringer. The latest demonstration consisted of the YouTuber handing the keys to his girlfriend and also handing her a crowbar to do her worst. When all was said and done, we couldn’t help but cringe a little bit at the results.

This time, matters are getting even more intense! The whole concept of the latest video is to load the bed to the maximum extent possible. It’s not going to just be with any old material, though. Instead, we check out the most destructive process possible as it’s filled with 13,000 lbs of concrete. This accounts for twice the max payload of the truck.

When all is said and done, the truck turns into an absolute mess. Not only is there concrete absolutely everywhere. The suspension also seems to have taken quite the beating. What will we see next from the master of mayhem? Only time will be able to tell that story.

« Is the Model Y the Tesla We’ve All Been Waiting For?