ProCharged Yukon Denali is a Lot Faster Than it Looks! 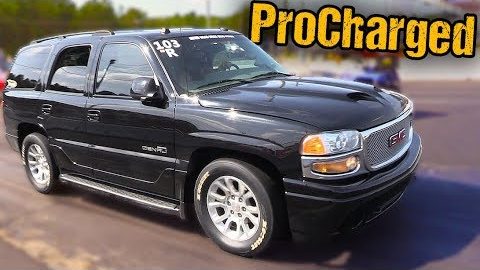 One of the fun parts about building a racing machine is that any platform is on the table. Some platforms are more set up to race than others, straight out of the box. However, sometimes, the bigger challenge of building something uncommon has a bigger reward as well. After all, what’s going to turn more heads? We think that we would be inclined to do a double-take without something like a GMC Yukon flying rather than a more common platform.

This time, we get to see just that. It seems as of recently, the phenomenon of turbocharged trucks has been gaining a little bit of momentum. This time, though, we check in with the truck that’s going in a little bit of a different direction. Instead of a turbocharger, this SUV is equipped with a ProCharger. The centrifugal supercharger surely does mix things up a bit.

As it turns out, the LS powered machine was taking on Drag Week this time. The overall goal was to get as close to an 11.50-second quarter mile pass every day without going faster. This might sound like something that is rather obtainable. However, when we throw in the fact that this truck weighs well over 5000 pounds, things get just a little bit more complicated. After all, moving that much weight that quickly is a sure fired recipe for breaking a couple of things.

Following along with the video below, we get to see just how well this heavyweight did on Drag Week. It isn’t too often that we see a full weight SUV moving out like this. In fact, we think that it would be pretty difficult to look at something like this and not want to hop in the market for a new daily driver. Just imagine rolling around town with all of those ponies under the hood. We would imagine that the truck ends up shocking quite a few potential competitors.