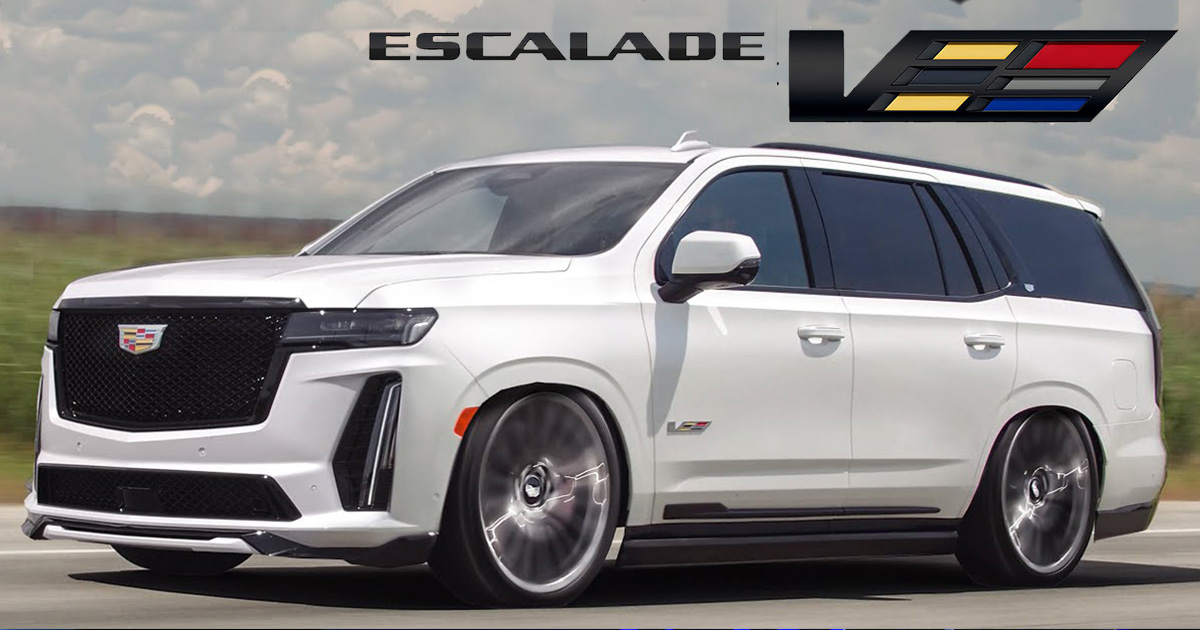 Today, Cadillac revealed full details surrounding the 2023 Escalade-V — the industry’s most powerful full-size SUV. It is the first-ever Cadillac V-Series SUV — an elevation of design, performance and technology and the purest expression of the passion that exists at the core of Cadillac.

Boasting a potent blend of refinement, power and technology, Escalade-V features performance-inspired styling and an unmistakable sound that combine for a head-turning street presence. With these distinctive attributes, the Escalade-V expands the V-Series lineup, now in its fourth generation, which offers more levels of performance while preserving the lineage of the original lineup introduced in 2004.

“Customers and enthusiasts have asked for an Escalade-V, and we’re thrilled to bring this high-performance SUV to market in the year of Cadillac’s 120th anniversary,” said Global Cadillac Vice President Rory Harvey. “We do not deploy the V-Series designation lightly. The arrival of the 2023 Escalade-V is the result of a rigorous development program that allows this highly anticipated model to meet the criteria and capability thresholds established by nearly two decades of inspired V-Series performance.”

At the heart of the Escalade-V is a supercharged 6.2-liter V-8 engine rated at 682 horsepower (508 kilowatts) and 653 lb-ft of torque (885 Nm). Standard performance elements include a 10-speed automatic transmission calibrated for Escalade-V, a full-time active all-wheel-drive system, and exclusive suspension hardware and software calibrations. An Escalade-V ESV version is also available

With the full-time active all-wheel drive system to enhance traction, along with the supercharged engine, Cadillac expects the Escalade-V to be capable of 0-60 mph sprints in under 4.4 seconds and a quarter-mile time of 12.74 seconds at 110 mph based on initial GM testing.

“With a power-to-weight ratio among the top in its class and advanced driving technologies to put that power to the pavement, the Escalade-V offers an engaging and energetic driving experience like no other full-size luxury SUV,” said Jaclyn McQuaid, executive chief engineer, Full-Size Trucks.  “More importantly, it lives up to the vigorous requirements of the V-Series Mondrian insignia.”

A supercharged legacy and AWD grip
Rated at a GM-estimated 682 horsepower at 6,000 engine rpm and 653 lb-ft of torque at 4,400 engine rpm, the Escalade-V’s 6.2L hand-built supercharged and intercooled engine builds on a legacy of supercharged V-8 engines offered in Cadillac V-Series models, those being the second-and third-generation CTS-V models, the XLR-V, and most recently, the CT5-V Blackwing.

The Escalade-V’s engine shares architectural similarities with the CT5-V Blackwing’s supercharged V-8, but features a larger, 2.65L R2650 TVS supercharger that helps overcome the higher inlet and exhaust restrictions on the full-size SUV application. It spins at up to 13,500 rpm to produce approximately 10 pounds of boost and has an electronically controlled bypass valve for optimal drivability. The supercharger’s unique four-lobe rotors are designed to broaden the engine’s power band, with great low-end torque production and strong high-rpm power.

The rest of the engine is designed to support the high output and the greater cylinder pressures that come with forced induction, including a durable forged-steel crankshaft, forged steel connecting rods and forged aluminum pistons. The aluminum cylinder heads are stronger and handle heat better than conventional castings. The heads also feature lightweight titanium intake valves.

A 10-speed automatic transmission pairs with the engine and features calibration for the unique powerband characteristics of its supercharging system.

The transmission sends transferred torque to an advanced, full-time active all-wheel-drive system that splits torque between the front and rear wheels for optimal traction and driver control in all conditions. The system varies the torque split depending on conditions, but some torque is always directed to the front wheels.