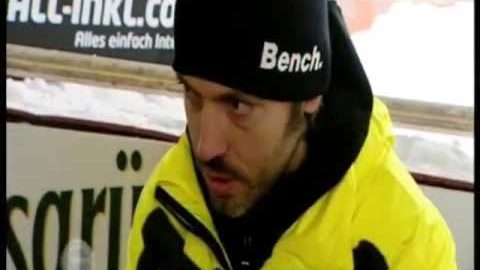 I have no idea what the guys in this video are saying and I’m not even mad about it, because this is hands down one of the coolest things I’ve ever seen!

Just last week, we brought you the video of a LEGO RC car speeding down a bobsled track. This week, we’re taking things up a big notch with some badass go karts taking over an Olympic bobsled track for some insane downhill shenanigans! These guys are strapped in and ready for some ridiculous speeds and tight turns!

There are a couple of differences in this video and the one of the LEGO RC car, most notably being that the track is actually frozen this time, where as the RC car was on a bare concrete track. That would give the RC car a little more control, but also a lot more friction. The guys in the karts also have the timing system running and are actually competing against one another to see who can cover the course in the quickest time.

With the karts fueled up and tuned to the cold weather, the daredevils hit the track, each taking turns to see how quickly they can go from the top to the bottom. Unlike the bobsleds the track was built for, these karts will be providing their own propulsion, using gravity as a bonus and not the only source of acceleration. I’m not sure how much power these karts are making, but they certainly sound healthy and despite the cramped quarters of the track, the little hopped up karts look to be hitting some pretty high top speeds.

I don’t remember right off how quickly a bobsled generally covers the course, but I am fairly certain it takes them a lot longer than a minute and 8 seconds, which is the quickest of the kart runs. Maybe the Olympic committee should consider adding some power to the bobsled races and making things a little more interesting for the teams hitting the track.

« Amazon Is About To Shut Down The Motor Oil Industry, Here’s How…