The guys over and RC Nation know we love some “outside the box” radio controlled ...

The guys over and RC Nation know we love some “outside the box” radio controlled vehicles, and they found one that I can say with a great deal of certainty that I’ve never personally seen before.

We’ve seen cars and trucks, pretty much daily. We’ve seen planes. We’ve seen boats. We’ve even seen submarines and blimps. And now we can add radio controlled snowmobiles to the list. But this it’s just some out-of-the-box toy, this thing really has some power and looks like a heck of a lot of fun!

We don’t get any close up looks at this rig, so it’s hard to offer any real information about it, but it does sound like a gas-burning engine, a combo that is super cool but seems to be starting to go the way of the dinosaur. These engines are very similar to what you’d find powering your push mower or a junior dragster, single-piston motors with tuned exhaust and even an adjustable carburetor to fine-tune the fuel mixture.

Depending on the displacement, some of these engines can output several horsepower, which equates to a lot of acceleration and top end when they’re strapped to a small chassis, regardless of type, that only weighs a few pounds. Horsepower-to-weight ratio matters just the same with RC vehicles as it does with cars when it comes to speed and acceleration, and this thing sounds like it’s churning out some decent power, an assumption that appears to be backed up by how quickly this snowmobile takes off across the snow.

I would love to see this thing up close to see how they mated the engine to the belt drive, and how the skis are setup with steering servos. I assume, as with most RC builds, you could build one that’s faster and more reliable using electric motors for power, but there’s something undeniably cool about cranking up a gas-burning engine and sending it screaming across the snow! 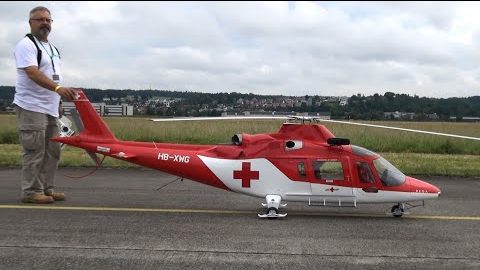